Brady and Patrick are back with a regular show to recap everything that happened since our last show. First, we break down the Patriots’ draft and give our opinions of the picks. Then, we take a look at what went right and what went wrong in the first two games of the Bruins/Blue Jackets series and look ahead to Games Three and Four. 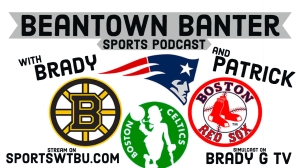 0:00 The Patriots had a pretty exciting draft! We break down the picks.

20:00 The Bruins and Blue Jackets are tied at one apiece after the first few games of the series. Our thoughts.

32:12 The Celtics took it to the Bucks in their own building in Game 1 with a blowout win.

Patrick is a junior majoring in journalism and minoring in public relations at Boston University’s College of Communication. Patrick is a co-director and the hockey editor at WTBU Sports. He aims to cover the NHL and the Boston Bruins for a living and to become a hockey insider. From Lynn, Massachusetts, Patrick is a graduate of Malden Catholic High School (’18) and is a huge Boston sports fan, avid golfer, and hockey fanatic. His favorite teams and athletes include, the Bruins, the New England Patriots, Tiger Woods, and Mark Scheifele. Co-host of the podcast, The Duck Boat Report, at WTBU Sports, and writer for Black ‘N Gold Hockey. He writes columns on the PGA, Bruins, and NHL for WTBU Sports. Patrick is also a Francis Ouimet Scholar. Find his author page at WTBU Sports, follow him on Twitter @PatDonn12, and check out his portfolio (patrickdonnellyportfolio.wordpress.com). View all posts by Patrick Donnelly