Yes, you read that right.

Vermont came into the weekend mathematically still alive for the Hockey East playoffs but needed to win out and two points in each of their remaining games to stay alive. With time winding down in overtime of a scoreless game, UVM head coach Kevin Sneddon elected to pull goalie Stefanos Lekkass for the extra attacker.

“I had seen it before a couple years back when I was at Northeastern,” added coach O’Connell. “We kinda had an inkling on the bench the they might do it and when they did it, our eyes kind lit up and said ‘lets go for the goal,’ even if you ice the puck you gotta try and get a win.”

The move, which on paper looks quite daring and bold, was actually about the only thing Sneddon could have done to keep his team alive. The tie would have ended their season just as much as a loss and so, without a doubt it was the right move.

But it still didn’t work.

Despite making 43 saves and not actually allowing the goal, Lekkas still picked up the loss after Chad Krys scored from the red line with 16 seconds left to salvage a win for the Terriers.

“It was great poise by Chad and great recognition,” said O’Connell. “He picked up the pick puck with his head down and he looked up, realized and looked like he was having a cup of coffee back there. It was pretty good.”

The empty net goal was BU’s reward for playing a pretty solid hockey game. They outshot UVM 44-29 and controlled the pace of play. Lekkas was strong in net, and if not for his performance, this game could have been wide open blown open.

That’s not to say UVM didn’t have their chances. Jake Oettinger stopped all 29 shots he faced, including a few point-blank bids right on the doorstep in the third period.

“I thought both goalies were terrific,” mentioned O’Connell. “Lekkas put on a performance. He was on and Jake was on. Jake was dynamite tonight, didn’t make a mistake and was very calm. Everything was clean. He was really good.”

Outside of the goaltending performance, O’Connell showed increased confidence in the fourth line, deploying them in some key situations late in the game. Gabe Chabot and Mathew Quercia were both strong on the forecheck and created a few good looks for the line late in the game.

“Chaber’s a bulldog.” Voiced O’Connell. “He’s about five foot six tall and five-six wide and he runs around and bangs into people and in a game like that, where its a little bit of a field position game and a wrestling match, he’s good. They had a huge shift in overtime and put a lot of pressure on them and they were really good down the stretch.”

BU is now tied with Maine for fifth in the conference and just two points behind Providence for fourth play in Hockey East, which marks the all-important final home-ice seed in the tournament. With the win last night, BU has officially clinched a spot in the Hockey East tournament. Both UVM and Connecticut, who are tied for 9th have just 12 points and do not have enough games to catch BU or even 8th place UNH for that matter. Hence, why the goalie why pulled in overtime.

The two teams will go back at it again tonight starting at 7pm. 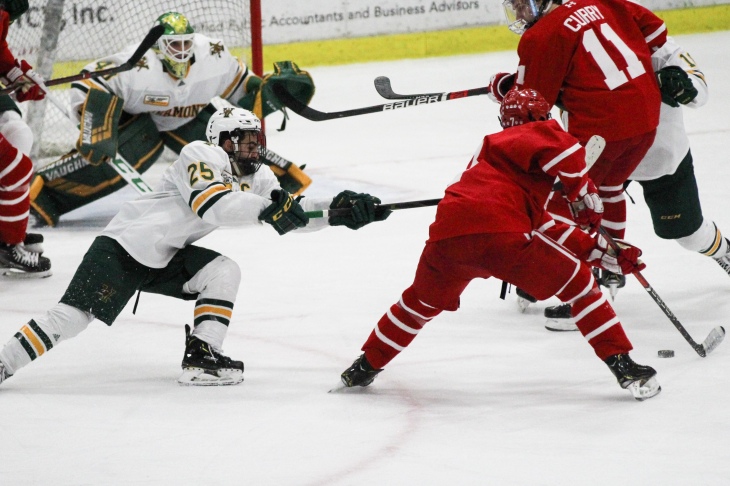