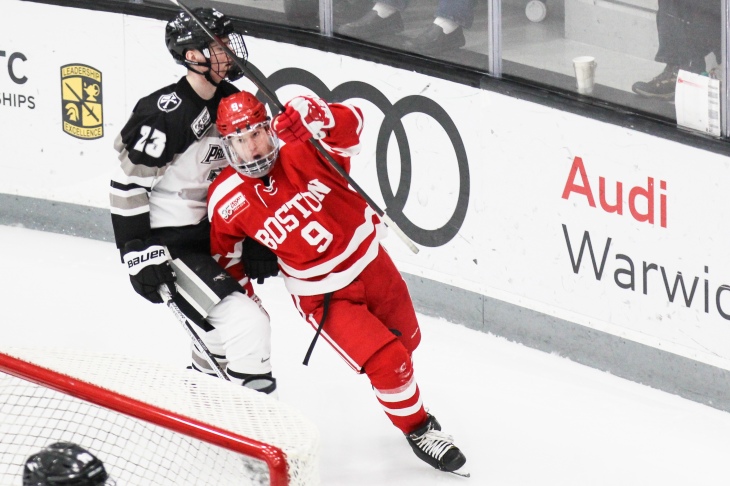 PROVIDENCE- In their most impressive win of the season, Boston University battled back from 0-2 and 3-2 deficits to stun Providence 4-3 inside Schneider Rink.

“We showed a lot of poise resilience on the bench,” added head coach Albie O’Connell. “That’s a really good hockey team and they play hard.”

After falling behind 3-2 just 10 seconds into the third period on a backhand goal from Scott Conway, David Farrance leveled the score 3-3 on a slapper from the point. Just as the puck crossed the line, Joel Farabee was decked into the PC goalie Hayden Hawkey and the play went to review. The goal held up and BU was given a power play as a result.

Five minutes later, Logan Cockerill put BU ahead with roughly twelve minutes to play. Bobo Carpenter feathered a soft pass from the top of the zone, allowing Cockerill to collect the puck at the dot and in one mention rip a shot top corner on Hawkey. It was just Cockerill’s third goal of the season.

“Its a season-changing play by Cockerill,” voiced O’Connell.

It was really a season-changing game for BU. They had plenty of reason to roll over after PC scored on the first shift of the third period, but the ever-maturing Terriers continued to fight all night.

BU is now back to .500 and sits tied with Boston College in third place with 16 points in Hockey East. What makes this game all the more critical is that BU has already played 14 league games, the most in Hockey East. They had played three more than BC and four more than first place UMass. BU has to take all the points they can and this weekend was a huge step in that direction. Don’t look now, but BU climbed to 24th in the PairWise after tonight. 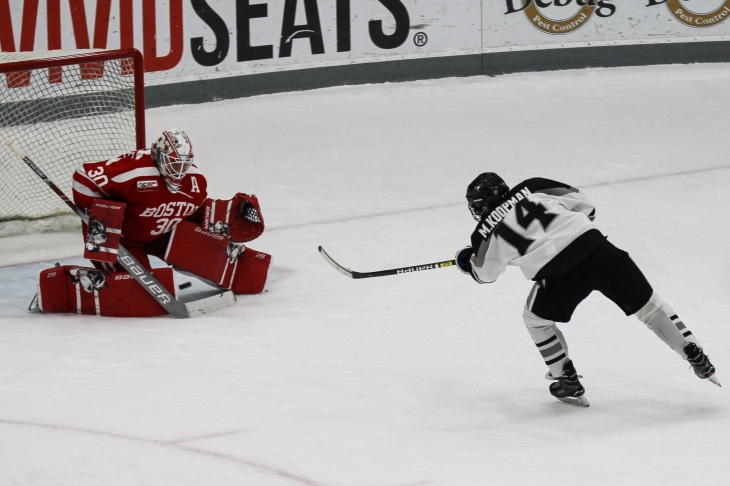 Back in the first, PC jumped on the Terriers and it looked as if things were bound to repeat themselves as Providence rolled over BU 5-0 in their previous meeting. Josh Wilkins banged home his 8th of the season from Jacob Bryan and Jay O’Brien just 6:30 into the game on the power play.

Less than three minutes later, Scott Conway scored his first of two on the night, doubling the PC lead.

BU’s Shane Bowers helped to stop the bleeding with a highlight reel tally two minutes later. David Farrance hit Bowers streaking into the zone, allowing the forward to keep his speed a power right in on Hawkey. From the bottom of the circle, Bowers roofed a wicked backhand past Hawkey and slow the PC roll.

“Obviously we made some nice plays tonight,” said O’Connell. “The first goal by Shane was a highlight reel. Backhand, shoreside, there was not a lot of space there and that got us going and enabled us to get back in the game.”

Bowers wasn’t done, though. 11:07 into the second frame, the Canadian WJC member finished off the beautiful passing sequence that started with a strong breakout in the BU end. From the top of the PC blue line, Bowers dropped a pass to Farabee, who carried the puck into the slot and drew two defenders with him. Menwhile, Bower slipped in behind uncovered on the back door and Farabee hit him with the return pass. Needless to say, Bowers didn’t miss the open net. 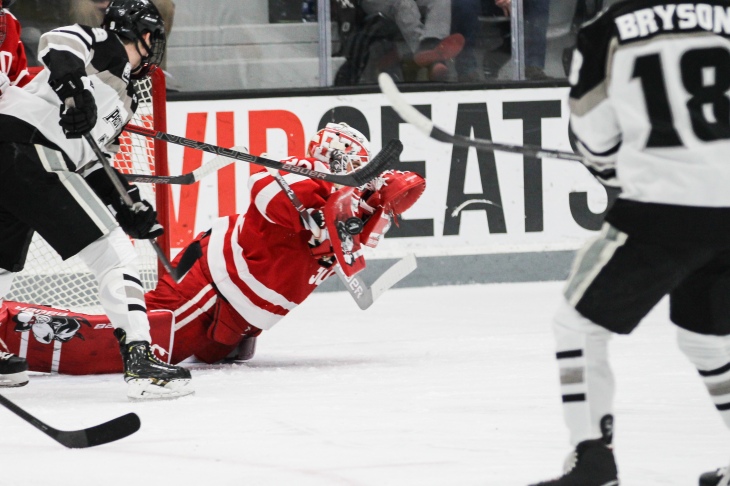 Unlike the night before against UNH, Providence really tested BU netminder Jake Oettinger with a number of high-quality scoring bids. All in all, the junior made 33 saves on the evening. Non was bigger than a breakaway save on Matt Koopman with less than two minutes left.

BU caught a huge break with close to 4:30 left when Providence’s Vimal Sukumaran drilled David Farrance from behind. Sukumaran picked up a game misconduct and BU spent the remainder of the game on the power play.

With the win, the Terrier extends their unbeaten streak to five games (4-0-1). Next up is Quinnipiac on Saturday the 19th as BU kicks off their longest homestand (five games) since the 2009 season.