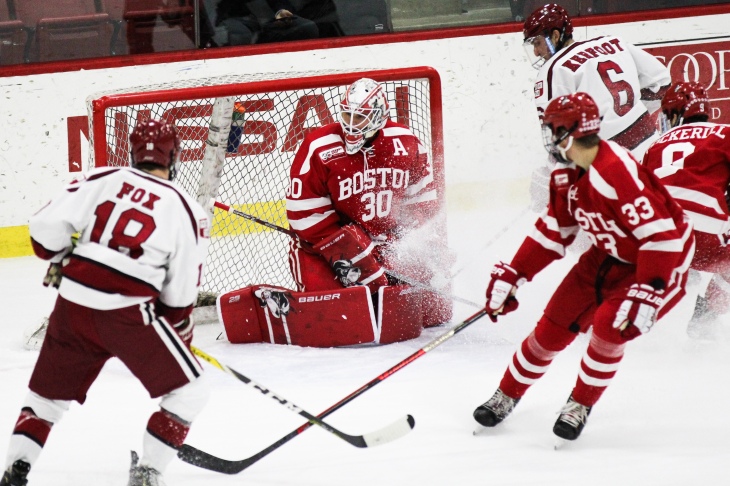 BU was back in action for the first time in nearly a month as the Terriers made the quick trip to Harvard, where Joel Farabee’s power-play strike at 5:54 of the third period knotted a game that was physical stalemate all evening long.

“It was a pretty hard fought game on both sides,” added head coach Albie O’Connell. “We didn’t have a lot of legs. Some guys had skating legs, but we are not really in game shape yet.”

Matthew Quercia potted his first goal as a Terrier just 2:05 into the contest. Ryan Cloonan made a strong push to the net on the near side boards as part of a two on two rush with Quercia. He then slid a pass back through the slot which allowed Quercia a wide-open look a the net. From the low circle, Quercia one touched the Cloonan feed past Harvard goalie Michael Lackey.

“I think some of the guys weren’t as alert as they could have been. Some of the guys were, so it was kind of an individual basis per guy. I thought our fourth line was really good, obviously, they scored a big goal,” said O’Connell. “

Despite the goal, Harvard had the upper hand in the first period and at one point lead 7-2 in shots. Most of that is due to the physical style the Crimson play and that was not left unnoted by Coach O’Connell.

“Harvard played really hard. They gave us a lot of fits and were really physical and our forwards were not really used to it. We struggled a bit at the start but settled in as the game went on”

Unlike the opening frame, BU carried the play for the duration of the second stanza, outshooting the Crimson 13-8, but it was Harvard’s Adam Fox who netted the lone goal of the frame. Fox, a member of the 2017 USA WJC team that won goal on Montreal, beat his former American teammate Jake Oettinger blocker side with 3:07 left in the second period to tie the game.

Lewis Zerter-Gossage gave Harvard the lead 1:36 into the final frame off a rebound in front of Oettinger. Zerter-Gossage banged home his 10th of the year form the edge of the crease, as Jack Drury and Case Dornback picked up assists on the play.

The lead did not last long, though. Joel Farabee, fresh of his silver medal performance with Team USA at the World Juniors in Vancouver tallied his fifth of the year on the power play. Patrick Harper made a push through the middle before leaving the puck for Farabee on the near side wall. From there, Farabee took two strides and ripped a shot past Lackey blocker side to tie the game.

Both Farabee and Logan Cockerill were on the US squad north of the border for the WJC. In the past, players returning from World Junior seem to play with a little more confidence and a little more swagger. For Farabee, that was obvious tonight. Outside of scoring, he looked poised with the puck and made confident decisions. He even went so far as to flipping the puck from behind the net into the crease to create some chaos. Bobo Carpenter almost even scored off the play and drew a penalty.

“I didn’t think Logan had his legs until the third, mentioned O’Connell. “He was not as fast as he normally is, but he gave us a pretty good effort considering he’s played a lot of hockey. Joel is really clever and made a difference in the game especially when we needed a goal.”

Jake Oettinger quietly put together a solid night’s work, turning aside 26 shots and limiting the second and third opportunities for Harvard.

A Pat Curry one-timer that was set up by a nifty saucer pass from Patrick Harper was snuffed out by Lacked prooved to the best chance of the overtime session for either squad, as the two teams settled on a 2-2 draw.

BU will have to find their legs quickly as the UNH Wildcats invade Agganis on Friday and BU is at Providence Saturday night.