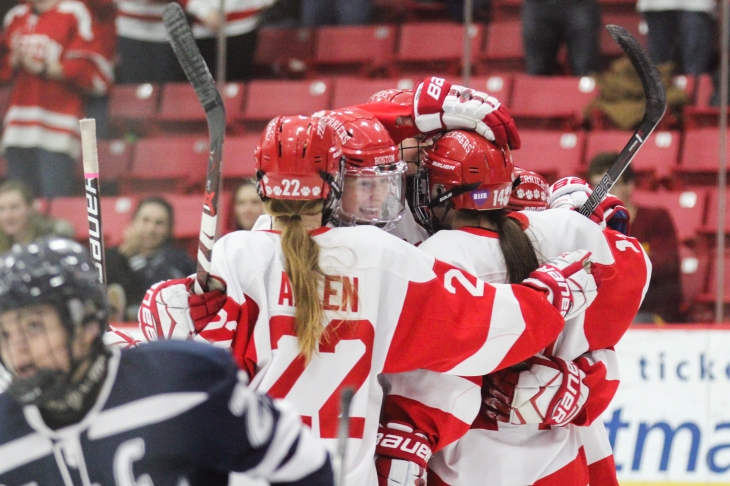 ROCHESTER – Head coach Brian Durocher and his Terriers handled the RIT Tigers with ease this weekend as their win streak now stands at five in a row.

The action all started with a Friday afternoon matinee as Corinne Schroeder got the call in net for the Terriers against Terra Lanteigne for the Tigers.

Natasza Tarnowski got the scoring started at 15:29 of the first period as she roofed a shot from the short side on a 3-on-1 opportunity due to a turnover she created in her own defensive zone. Tarnowski’s unassisted goal was her first of the season.

Sammy Davis cashed in on the power play at 3:57 of the second period after banging in a cross-crease feed from Jesse Compher for her ninth goal of the season. Freshmen Kaleigh Donnelly picked up the secondary assist on Davis’ tally. The helper was Donnelly’s first collegiate point.

Compher extended the Terriers’ lead to 3-0 at 9:52 of the second with BU’s second power play goal of the game after a slick passing play from Nara Elia and Abby Cook set up Compher for her tenth goal of the season.

Not to be outdone on the power play, the Tigers’ Rit Farrand picked up her second of the season on the man advantage to cut the lead down to 3-1. Farrand stuffed home her chance at 5:20 of the second frame after a feed from Mallory Rushton, Taylor Sims earning the secondary assist.

That score would remain throughout the third period as Schroeder stood tall for the Terriers, turning aside 14 shots in the third to seal the victory. Schroeder made 27 saves, picking up her sixth win of the season while Lanteigne stopped 26 shots in the loss for the Tigers.

Jesse Compher extended her point streak 12 games (9G, 15A) with her seventh multi-point effort over her last eight games.

The Terriers went two-for-six on their power play opportunities while killing off four of RIT’s five power plays.

The Terriers and the Tigers returned to action on Saturday afternoon as Schroeder and Lanteigne were back in between the pipes for their respective teams.

Deziray De Sousa opened the scoring up at 12:55 of the opening frame, putting home the rebound after Kristina Schuler’s shot rang the inside of the post. Alex Allan earned the other assist after her blocked shot allowed Schuler to skate in on the rush, leading to DeSousa’s second of the season.

That score would hold as the only tally of the first, but just 56 seconds into the second, Jesse Compher scored her eleventh of the season on a 4-on-3 power play after collecting a pass from Abby Cook with Kaleigh Donnelly picking up the other assist.

BU’s power play dominance would continue as Abby Cook rifled a long shot from the point past Lanteigne at 8:18 of the second to earn her sixth goal of the season. Compher and Abbey Stanley assisted on the goal as the Terriers’ lead stood at 3-0.

About five minutes later at 12:33 of the second, Sammy Davis notched her tenth of the season on the power play on a one-timer off a cross-ice feed from Compher with Abby Cook also assisting on the goal, extending the lead to 4-0.

That proved to be all she wrote for Lanteigne, who was pulled in favor of  Jenna de Jonge following the goal after making 23 saves for the Tigers.

4:43 into the third period, Courtney Correia scored her first collegiate goal after stuffing a feed from Compher to put the Terriers up 5-0.

The scoring frenzy continued as Kaleigh Donnelly also scored her first collegiate goal on the power play at 10:07 of the final frame. Davis fed the puck to Compher who ripped a shot on net as Donnelly was there to bang in the rebound. Jessi O’Leary came into the game for the Tigers in relief of Jenna de Jonge, who made 10 saves.

Shortly after at 10:49 of the third, freshman Nicole McGuigan got her first collegiate action in net for BU, taking the reins from Schroeder latte in the game.

Up 6-0, the Terriers would not let off the gas as they scored another power play goal. This time it came from Nara Elia in the slot with the assist from Reagan Rust. Elia’s fifth goal of the season came at 13:20 of the third.

Late in the game at 15:44 of the third, Nastaza Tarnowski picked up yet another power play goal for the Terriers with her second of the weekend with assists from Correia and freshman Emma Wuthrich to cap off the scoring at 8-0.

All in all, BU scored an NCAA-record six power play goals as Compher had a five-point effort (1G, 4A) to extend her point streak to 13 games (10G, 19A) with her eight multi-point effort over her last nine games.

Schroeder and McGuigan combined for a 22-save shutout while Donnelly and Correia each earned their first collegiate goals. Donnelly also recorded her first three collegiate points this weekend with a goal and two assists. Sammy Davis now holds a nine-game point streak (6G, 12A) as well. 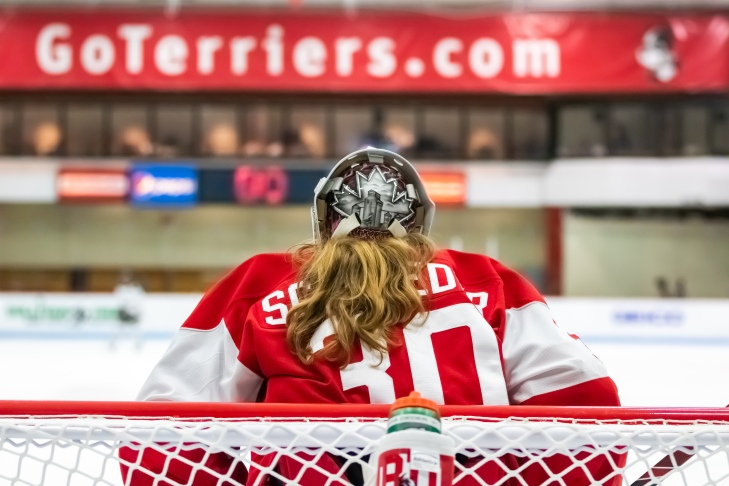 In total, 12 Terriers recorded a point on Saturday with eight different goal-scorers as well.

With the sweep of the Tigers, the Terriers improve to 8-4-4 on the season (3-0-0 out-of-conference, 5-4-4 WHEA) as their win streak now stands at five. BU is not back in action until after Christmas when they host Penn State (7-9-2) on Sunday December 30th and Monday December 31st in two matinee matchups at Walter Brown Arena.

Patrick is a junior majoring in journalism and minoring in public relations at Boston University’s College of Communication. Patrick is a co-director and the hockey editor at WTBU Sports. He aims to cover the NHL and the Boston Bruins for a living and to become a hockey insider. From Lynn, Massachusetts, Patrick is a graduate of Malden Catholic High School (’18) and is a huge Boston sports fan, avid golfer, and hockey fanatic. His favorite teams and athletes include, the Bruins, the New England Patriots, Tiger Woods, and Mark Scheifele. Co-host of the podcast, The Duck Boat Report, at WTBU Sports, and writer for Black ‘N Gold Hockey. He writes columns on the PGA, Bruins, and NHL for WTBU Sports. Patrick is also a Francis Ouimet Scholar. Find his author page at WTBU Sports, follow him on Twitter @PatDonn12, and check out his portfolio (patrickdonnellyportfolio.wordpress.com). View all posts by Patrick Donnelly