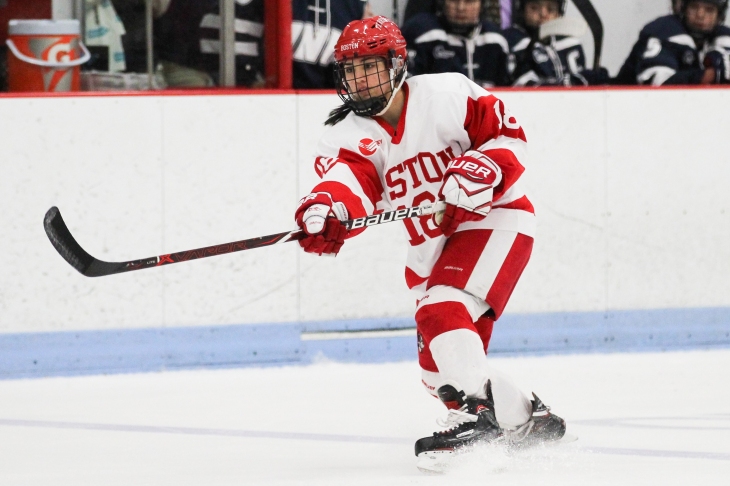 The Terriers are riding high on a three-game win streak after completing the program’s first ever weekend series sweep of Boston College to begin the month of December. BU (6-4-4, 5-4-4 WHEA) will carry that momentum into the Gene Polisseni Center at the Rochester Institute of Technology (5-8-4, 3-4-0 CHA) this weekend for a two-game road set against the Tigers.

In the Terriers’ two victories (3-2 last Friday, 4-2 on Saturday), tri-captain Sammy Davis recorded five total assists, helping her earn the Hockey East Player of the Week award, while Jesse Compher scored twice and added three helpers to extend her point streak to 11 games (8 goals, 14 assists in that span), the third-longest active point streak in the NCAA. 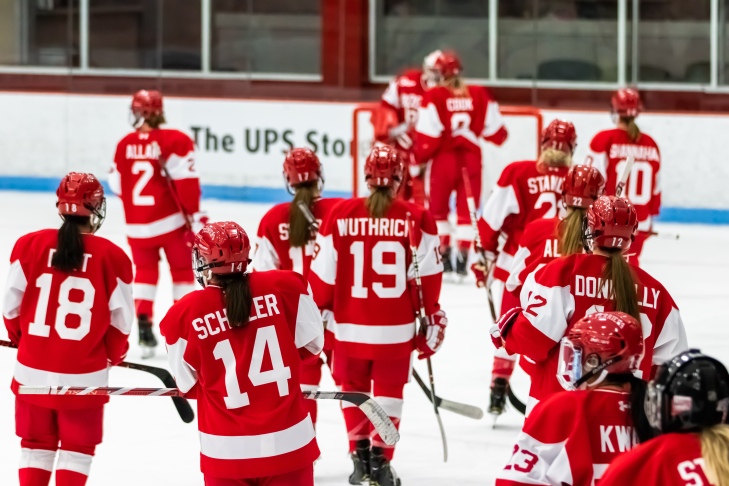 Freshman goaltender Kate Stuart was given the starting nod in Friday’s game over Corinne Schroeder, who started Saturday. Stuart earned her second win in her second career start, stopping six BC power plays en route to 42 saves and a 0.955 save percentage and her first WHEA Rookie of the Week award.

RIT is coming off of their own weekend sweep, defeating Lindenwood University 5-2 and 3-2 last Friday and Saturday at home. It was the Tigers’ first series sweep since Jan. 27-28, 2017, and it came from some impressive individual play.

CHA Rookie of the Week Hunter Barnett found the back of the net in both games against Lindenwood, taking all of two shots on goal to do so. Junior Taylor Baker recorded a career-high three assists to power the 5-2 win in Game 1, and sophomore Ellie Larson scored two goals to pull away from a 1-1 tie in Game 2.

There isn’t much of a history between these two teams, as their first meeting was a weekend series at Walter Brown Arena last season. BU won the first contest 5-1, thanks in part to a power play goal from then-sophomore Abby Cook in the second period. RIT pulled the all-time series even with a 2-1 overtime victory the next day. Senior Mallory Rushton scored the game-winner just 24 seconds into overtime. Rushton notched three points (1g, 2a) in the recent series against Lindenwood, while Cook’s five goals and eight points rank third on the Terriers this season.

Head coach Brian Durocher has to be happy with how his team has played. BU is 5-1-1 in their last seven games and, notably, have killed 25 of 28 penalties in that span after beginning the season just 20-29 in penalty kills.

The primary focus now for BU is to keep the offense rolling. The Terriers have netted three or more goals in each of their last seven contests. It’s no surprise that Davis (8g, 12a) happens to have a seven-game point streak (4g, 11a in the streak) and that she’s tallied multiple points in each of BU’s last five games. Joining her on the Terriers’ top line are Compher (9g, 15a) and freshman Mackenna Parker (4g, 2a). On the season, that trio has combined for 21 of BU’s 36 goals and 29 of the team’s 58 assists. As long as these top-line forwards keep making opposing goalies nervous, BU will keep winning.