By: Denny Hackett and Brady Gardner

On Friday, the Terriers fell to the Eagles 4-1 despite a strong first period showing in the first round of the annual Battle for Comm Ave. The lone goal-scorer for the Terriers, Chad Krys got on the board early with a power play goal at 7:35 in the first period, but that was all the scoring for BU.

“In the first period, I thought we played our best period of the year,” head coach Albie O’Connell said.

Both teams set the tone for physicality early in the game with some huge hits going both ways, showing that there is no love lost between the cross Comm Ave rivals.

Just over a minute into the game, BC forward Jack McBain received a five minute major and a game misconduct for a hit to the head of Terrier forward Joel Farabee, who immediately went to the locker room following the hit. Fortunately, Farabee returned to the ice quickly and finished the game.

After the first period, it was all BC. The Eagles opened the game up after sophomore Logan Hutsko scored two goals off faceoffs in the second period. By the third period, the Terriers started to fall apart. Five minutes into the third, senior forward Christopher Brown scored BC’s third goal before freshman forward Marc McClaughlin put the game away with an empty netter with just two minutes left to play.

Toronto Maple Leafs’ prospect Joseph Woll was stellar for the Eagles in net on Friday. He allowed just the one goal on 39 shots, making 38 saves along the way. It wasn’t just the quantity of saves but also the quality for Woll. There were multiple instances where Woll had to dive across the goal mouth or flash his glove to maintain the BC lead.

“I thought he made some incredible saves to keep us in the game, they had a chance to break it open early with the five minute major and thoroughly out played us in the first period but it was just one to nothing going into the break,” said BC head coach Jerry York after the game. 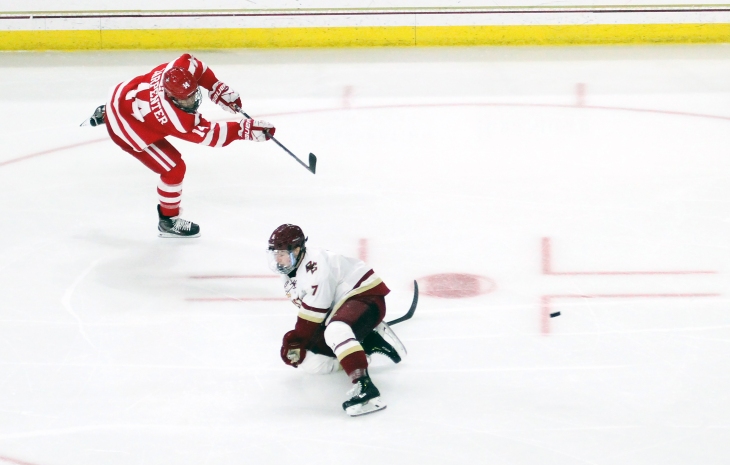 Seeking to avenge Friday’s loss on home ice, the Terriers followed the Eagles to BC’s Conte Forum for the finale of the weekend series, and came away with a scoreless draw.

BU goaltender Jake Oettinger bounced back impressively from conceding three goals the night before, stopping all 42 shots he faced and silencing the Eagle faithful all night.

“He was our number one star”, O’Connell said. “It was nice to see that he could go into a hostile building and play a really good game.”

Following a back-and-forth first period, each side got an opportunity on the power play in the second, but were unable to take advantage. The Terriers poured on the pressure in the third, creating promising chances and running up the shot total, but their efforts were ultimately not enough to beat BC’s resilient Joseph Woll.

In sudden-death overtime, BU got one of the best chances of the night with just seconds left to play, as freshman Joel Farabee nearly put himself in the BU vs. BC history books with a winner. However, Farabee’s sneaky move and shot effort was once again turned away by Woll, and the buzzer sounded.

In comparison to Friday’s 4-1 scoreline, Saturdays scoreless draw was a credit to both sides’ resolute defensive play and commendable goaltending, but perhaps a disappointment to two very potent offenses. It was the first time in 279 all-time matchups between the historic rivals that the teams skated to a 0-0 tie.

“No one likes to tie, but we were pretty happy with our effort”, said O’Connell.

The Terriers will now set their sights on a home-and-home series with UMass Lowell between December 7 and 8. The opener will be played at BU’s Agganis Arena on Friday at 7:30pm, and the teams will make the trek to Lowell for a 7pm start on Saturday.