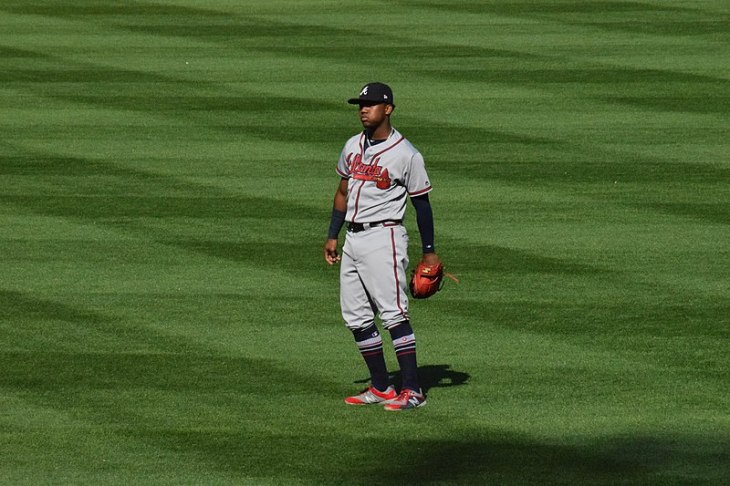 The 2018 season saw the debuts of many young talents that produced campaigns that you’d expect to see out of five-year or 10-year veterans. Here are the top 15 rookie campaigns from the 2018 season.

The flamethrowing righty looked solid out of the pen for the Cardinals. With a sinker that reached 105 mph and a low-90s slider, Hicks just needs some better command to become an elite reliever but he’s ONLY 21. There’s plenty time for that.

The son of hall-of-famer Ivan “Pudge”, Rodriguez cracked the Giants roster in late May and looked great pitching to a 2.81 ERA and a 1.13 WHIP in 118.1 innings. Rodriguez has plenty more to give as the Giants desperately look to make the their roster younger.

Winker was hitting .299 when his rookie campaign was cut short due to season-ending shoulder surgery. If he can get back to 100 percent before 2019 begins, his defense will need improvement but other then that, Winker needs very little help offensively.

Barria is just 21 and his strong 3.41 ERA in his rookie campaign means he has great potential as he continues to develop in the bigs. Barria averaged just under five innings per start so that’s something to work on, but a 1.27 WHIP in 26 starts is a strong start and he can only get better. Remember that HE’S ONLY 21!

The 27 year-old flamethrower developed into Blake Treinen’s setup man by the end of his rookie campaign. In 69 appearances, Trivino pitched to a 2.92 ERA and a 1.14 WHIP. Trivino has a triple-digit fastball and wipeout breaking balls with plenty more years to spend anchoring the A’s pen.

Moran never got any opportunities playing behind Altuve, Correa and Bregman in the Astros’ infield and was sent to Pittsburgh in the Gerrit Cole trade. Once in Pittsburgh, the 25 year-old took off, hitting .277 in 144 games. The Pirates were feared to begin tanking after trading their star players away, but Moran helped the Pirates stay relevant in the deep NL Central.

Anderson was a bright spot on what was a lackluster 98-loss Marlins team. Anderson hit .273 with 161 hits in 156 games playing third and right field for Miami this season. Anderson looks like a solid bat and an above average defender, so he may be one of the keystones of this very young franchise.

Much like Anderson on the Marlins, the 22 year-old Keller was a bright spot on a 104-loss Royals team. Keller went 9-6 with a 3.08 ERA in 41 games (20 starts).  Keller gave up just seven homers in 140.1 innings. He’ll continue to get better and his rookie year showed he’s already off to a strong start

The prize of the 2016 trade that sent Aroldis Chapman to the Cubs for their championship run, Torres was a hugely clutch player throughout the first half and made the All-Star team with a .294 batting average. Torres has incredible potential but needs to shake off a rough second half and keep growing as a player.

The 22 year-old first rounder excelled in every way imaginable in the Cardinals’ rotation this season. The righty had a 3.34 ERA with 182 strikeouts and just 108 hits allowed in 151 innings (28 starts). Flaherty already looks like an ace and he can still get better. We may be looking at the 2019 Opening Day starter for St. Louis.

The 23 year-old flamethrower rose to prominence in the Dodgers’ rotation as every Dodgers starter battled through injuries. Buehler pitched to a 2.62 ERA with a 0.96 WHIP, both lowest among qualified rookie starters, in 23 starts this season.

Buehler was also unbelievable in the playoffs making multiple clutch starts for L.A in the NLCS and World Series. Buehler is only 23 and L.A might lose Clayton Kershaw this offseason if he opts out of his contract, so Buehler’s already strong showing will need to get stronger as he grows into the Dodgers’ next ace.

“Ohtani-San” was probably the biggest excitement going into 2018 coming over from Japan. Only 23, Ohtani looked strong on the mound with his electric fastball and his great slider and splitter.

Soto had one of the best seasons ever by a teenager in a rookie campaign on a disappointing Nationals team. Hitting .299 with 22 homers, a .406 on-base %, 22 homers and a .923 OPS in just 116 games, Soto will likely finish No. 2 in NL Rookie of the Year voting and either way is key to the future success of the Nationals

Andujar was not expected to make the big league roster in 2018, but Brandon Drury’s injuries gave the 23 year-old Andujar a chance and he cashed in. He hit .297 with 27 homers, 47 doubles 92 RBI and a .527 slugging percentage. His shaky defense needs lots of work and Andujar’s job at third may be at risk. The doubles machine might be moving to first base or full-on getting traded before 2019 starts.

This one’s an easy one! Acuna came to the majors on April 25th and never looked back. Acuna energized the Braves with his aggressiveness, his speed and his strong defense. He hit .293 with 26 bombs, 78 runs scored, 26 doubles and a .552 slugging % in just 111 games, not to mention hitting leadoff homers in three straight games and homering five times in a row total.

Acuna is the other half of the top two NL Rookie of the Year candidates along with Soto and whoever wins doesn’t matter because Soto and Acuna are two of the brightest future starts of MLB.