BOSTON –  In a game that came down to the fifth and final shot, Boston University fell to Louisiana State University 2-1 on penalty kicks. LSU will move on to the next round of NCAA Tournament play, while BU’s season comes to a close.

The match was decided when Tiger sophomore Lucy Parker misled BU keeper Morgan Messner and sent a strike into the left corner of the net. The Tigers were down 1-0 heading into the fourth round of kicks, but Parker’s conversion, coupled with another from Abbey Newton, turned the tide in LSU’s favor.

The dramatic penalty shootout was a microcosm of the entire fixture. Both teams launched a barrage of attempts, with the Terriers outshooting the Tigers 30-16. But Messner and LSU keeper Caroline Brockmeier safeguarded the nets, with four and seven saves, respectively. With the score remaining deadlocked at 0-0, the contest became the first in tournament play since 2009 to head to a shootout.

BU applied the most offensive pressure they had all year. They opened the game with a 10-2 shot advantage over LSU in the first 35 minutes. The 30 total tries were a season high for the Terriers, eclipsing the mark of 27 shots set against Army back in October.

Those shots came from throughout the roster. Sophomore Anna Heilferty had seven, Chelsea Churchill and Shannon Keefe each took six, and four other Terriers put up at least two attempts on net.

Senior Libby Closson nearly broke the tie in the 28th minute, but her shot from distance ricocheted off the post. LSU had their own missed opportunity in overtime, when Morgan Messner dove in front of a player to stop a well-placed cross. 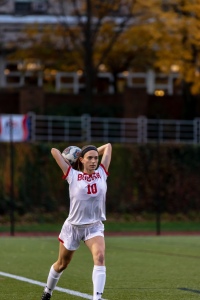 Messner capped off a stellar freshman season as keeper for the Terriers. She ended the year with seven shutouts while splitting time with sophomore Amanda Fay.

For the Tigers, the shootout victory was their third such win in the past four games. They advance to the second round for the first time since 2009. Brockmeier, who now has 106 saves this season, secured her tenth shutout of 2018.

BU ends the year at 11-7-4, with Sunday’s decision officially recorded as a draw. The Terriers were 1-7-1 at one point in the season, but rattled off a 13-game unbeaten streak culminating at the NCAA Tournament.

The run, which started on Sept. 16 with a 1-1 draw to American University, included just three goals allowed by BU. They outscored their opponents 19-3 in that span.

Taylor Kofton broke out as a strong finisher, scoring four goals on her way to winning Rookie of the Year. Anna Heilferty continued to build her offensive resume with six scores and six assists, landing the forward on the All-Patriot League First Team.

Though Sunday’s matchup with LSU resulted in a first-round loss, the 2018 season was undoubtedly a resounding success for Boston University women’s soccer.