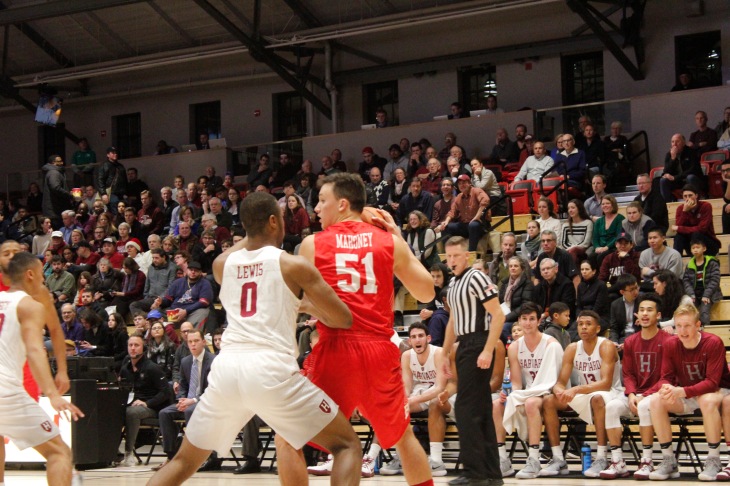 If you were to choose the player on the Boston University men’s basketball team you would least want to challenge in a game of one-on-one, the answer might be junior forward Max Mahoney.

“In a one-on-one matchup, we trust him against anyone in the league,” classmate Tyler Scanlon said.

Mahoney emerged last season as the Terriers most reliable scoring option. In his freshman season, the Basking Ridge, N.J. native’s season-high was 12 points in a game against the bottom-feeding Lafayette Leopards. Last year, his outputs were mind-boggling as he put up numbers many Terriers fans would have never found possible.

Mahoney scored 20 points on six different occasions. In a December loss to UMass Lowell, he was unconscious on the offensive end, making 14 of his 18 field goal attempts for 29 points in addition to compiling 11 rebounds and protecting the rim to the tune of three blocks. He then began conference play with consecutive 22-point efforts against Loyola-Maryland and Lehigh, going a combined 19-for-32 from the field with 14 total rebounds.

“He is real smart in the post,” Scanlon said. “He settles things down for us. He is a scoring option down there. That opens up a lot of things for other guys.”

Later in January, Mahoney accomplished the near-impossible. He managed to score 27 points in just 20 minutes in a win over the Greyhounds, faring 12 of 14 from the field. Two weeks later, he put up 25 points on 10-for-14 shooting in a loss to American.

“He is an inside force,” head coach Joe Jones said. “He’s a guy that scores the ball with his back to the basket at a very high rate. So, he gives you an inside presence.”

In the Terriers biggest game of the year, a 88-82 win at Lehigh in the Patriot League Tournament quarterfinals, Mahoney was massive. He shot 9-for-13 en route to a 27-point effort to push BU to the conference semifinals where they eventually fell to conference-champion Bucknell.

“I think it has grown, just being confident in my own abilities,” Mahoney said. “Having a good year last year. Freshman year, I was more a role player and I understood that. But, last year [I stepped] into a bigger role. Knowing this year, after losing some guys, my role might change again.”

Mahoney earned All-Conference Third Team honors after finishing the season with a 60.1 percent conversion rate from the field, the highest field goal percentage in BU history. But, the season was not perfect for the big man. He shot worse from the free throw stripe (55.6 percent) than he did from the field.

Additionally, there were games last year where Mahoney was subdued. In a loss to Holy Cross in mid-February, Mahoney went just 2-for-7 from the field for 10 points. In a 14-point home loss to Navy later that month in which BU scored just 48 points, Mahoney took only three shots en route to scoring 10 points.

“I hope that he is able to sustain his level of play more consistently,” Jones said. “He had many great moments last year but now we are looking for him to sustain that level of play throughout the season.”

Maintaining consistency would set a great example for the budding underclassmen on the team. Mahoney will be charged with mentoring freshman big men such as Jack Hemphill and Jordan Guest.

“We are a pretty bottom-heavy team this year,” Mahoney said. “A lot of new guys. I feel a lot of responsibility to motivate these guys every day and help them get better.”

Mahoney has the opportunity to pass along some of the tips he has learned playing under Jones’ system for two seasons.

“I have been here for a while now so I know the offense and defense pretty well,” Mahoney said. “Trying to pass on the knowledge I wish I knew as a freshman to them.”

Mahoney has been dealing with back issues as preseason has progressed, making him a question mark for the season opener against Northeastern. It is not a stretch to say the Terriers need his body on the floor.

“He’s got a lot of experience so you lose an experienced guy,” Jones said. “He is just a guy who is going to play with a ton of energy. We lose a lot when he is out.”