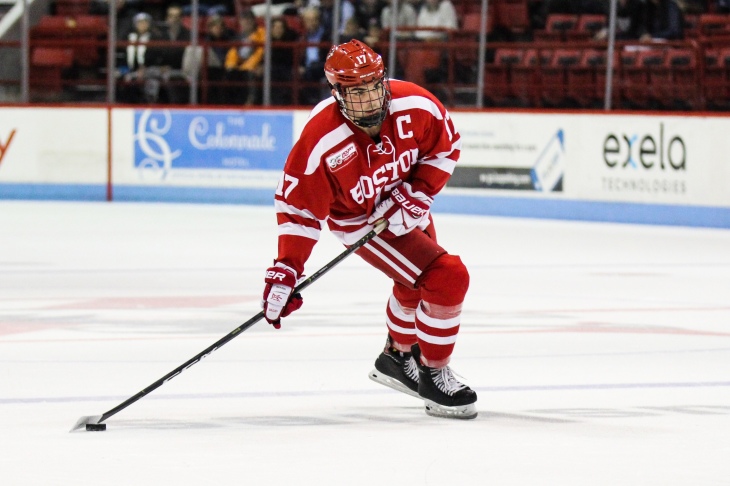 Behind goals from five different scorers, BU overcame an early 2-0 deficit and another Northeastern lead late in the game at Matthews Arena to salvage a 5-5 tie with the Huskies, picking up their first Hockey East point in the process.

“I thought it was a college hockey game,”said head coach Albie O’Connell. “Both teams put it all out on the line. I liked the way we played and I thought we played hard for 60-minutes. We showed a lot of guts throughout the game, coming back early and in the end.”

Chad Krys found a seam on a power play midway through the third period with a point shot, tying the game 5-5. Bobo Carpenter and Dante Fabbro helped set up the Krys point slapper that deflected off NU goalie Cayden Primeau (45 saves) and in. The goal marked BU’s first power play goal since opening night.

Kry’s goal came after a feverish start to the final stanza. Trailing 3-2 ending the third, Joel Farabee finished off a beautiful feed from Patrick Harper from behind the goal line, knotting the game 3-3 just 2:42 into the period.

Just over two minutes later, Bobo Carpenter tipped home a David Farrance shot for his third goal of the year to give the Terriers their first lead of the season since the second period of opening night.

Much like Krys’ goal, Carpenter’s tally was a direct result of getting pucks to the net and getting to the net front. Coach O’Connell mentioned after the game that he wanted his team to get 15 shots on goal a period. The first period was the lone frame BU failed to reach that bar, as the accumulated just 10. In total, they had 50.

“Those are the areas you want to go to,” said Carpenter. “Quinn harped on it too. If you want to score goals, that’s where it usually happens. Quinn and Albie harp on it a lot and it goes to show you that it does happen.”

Unfortunately, the lead did not last long. 2:01 after Carpenter’s strike, Grant Jozefek deposited a 5 on 3 power play goal in the back of BU’s net. BU was called for a questionable two many men call and before that could run out, Shane Bowers was whistled for cross-checking.

It was Jozefek’s second of the game and it was set up by Tyler Madden and Jeremy Davies, allowing Jozefek to be all alone in the low circle for a one-timer. That tied things 4-4.

Five minutes later, Patrick Schule netted his second of the game to regain the Husky lead at 5-4. BU’s Logan Cockerill lead a rush into the NU zone but fired a puck wide of the net, basically creating a breakout pass for NU. The next thing you knew, Schule was barring down on Jake Oettinger (27 saves), who he beat five-hole with a slick move to open the goalie up.

Back in the first, NU posted two goals in just 3:11 on BU starting goalie Max Prawdzik. First, Jozefek beat him low for his fist of the game 2:07 into the contest. Not long after, Babby Hampton redirected a centering pass off the post and in to double the Husky lead.

“It was just a different look,” said O’Connell on giving the start to Prawdzik. “We have let in a lot of goals during the first four games. Max works hard and he was confident, but obviously a little nervous off the hop there. But, he let in two quick ones so I went right back to Jake there. I didn’t want it to get out of hand.”

Logan Cockerill helped keep the Terriers in the game. He scored shorthanded in the closing minutes of the first period on a power play that would have really put the game away for NU. It was his first goal of the season and a highlight in a night that coach O’Connell called one of his best games as a Terrier.

“A big point of emphasis when we [with coach O’Connell] is me moving my feet and creating my opportunities off that,” Cockerill said. “I think I was kinda trying to play a game that wasn’t really my identity the past couple games but got back to keeping it simple, moving my feet and waiting for the chances to come to me.”

In the second frame, Patrick Curry tallied a redirection goal off a Kasper Kotkansalo shot from the point, tying the game 2-2, 3:12 into the period. Again, it did not last long, as Schule scored his first of the night just 1:18 after Curry’s first of the year.

All that led to the back and forth third period. In overtime, BU outshot the Huskies 4-3 and for the game, BU amassed 50 shots to NU’s 34.

The two teams will do battle again Saturday night as the series shifts to Comm Ave and Agganis Arena.