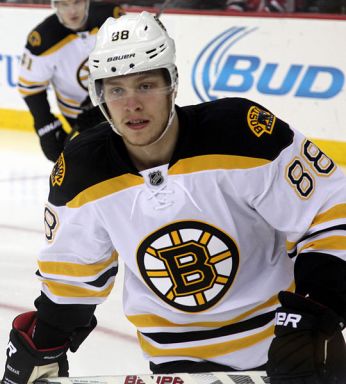 The Bruins’ first line has been one of the biggest storylines so far to start the season. The trio of Patrice Bergeron, Brad Marchand, and David Pastrnak has been nearly unstoppable, combining for 36 points in seven games. Through the first seven games, Pastrnak has eight goals, including a hat trick, and two assists for nine points to go along with Bergeron’s 13 points (6G, 7A) and Marchand’s 12 (2G, 10A).

In the Bruins’ 8-2 blowout of the Detroit Red Wings, Pastrnak notched a hat trick, recording his 99th, 100th, and 101st career NHL goals. With this, Pastrnak became the second-fastest Bruin to reach 100 career goals and the first player from the 2014 draft class to hit the mark, accomplishing this before the likes of other highly-touted talents like William Nylander, Robby Fabbri, Kevin Fiala, Leon Draisaitl, and Dylan Larkin. Mind you, Pastrnak was drafted 25th-overall in the first round, long after others like Nylander, Larkin, or Draisaitl.

To say having Pastrnak fall into the Bruins’ lap at 25th-overall was the steal of the draft would be an understatement. About halfway into his first professional season in North America, Pastrnak was already too good for Boston to keep buried away developing in the AHL (28 points in 25 games). When he was called up, Pastrnak made an immediate impact and by seasons’ end had 10 goals and 27 points in 46 games; not bad for a kid who had never played in North America and weighed 165 pounds soaking wet.

Although his second season was marred by a broken foot, Pastrnak still managed 15 goals and 26 points in 51 games. The Bruins saw brilliant flashes of the potential the young Czech possesses. Outside of the NHL, Pastrnak played at just about point-per-game level in the AHL (32 points in 28 total games) and the World Juniors (11 points through nine games) in his first two seasons.

His third season in 2016-17 is where he really broke out on to the scene league-wide. Pastrnak came into training camp with noticeably more muscle, weighing at 194 pounds. Pastrnak’s physical development paid off in spades with 34 goals and 36 assists for 70 points in 75 games, a near point-per-game pace.

Last season, Pastrnak continued to flourish, especially from playing on the top line, contributing to Brad Marchand’s ascension, and benefitting from Marchand’s stardom at the same time. The 22-year-old closed the season with 35 goals, 45 assists, and 80 points, playing in all 82 games.

This season, things are looking even better for the young Czech. Currently on pace for a goal-per-game and over 100 points (which is neither sustainable, nor realistic, just for reference to his early dominance), Pastrnak is potentially and realistically well on his way to a 40-goal and point-per-game campaign, barring any injuries or significant droughts.

How much are the Bruins paying this young superstar? It would have to be upwards of $7-million or maybe even $8-million, right? Nope. The Bruins have Pastrnak at a $6,666,666 cap hit for the next five seasons (including this season). That is insane.

The FBI may want to open up an investigation for grand larceny because the Bruins have an absolute bargain in Pastrnak’s contract. Not only that, they also have bargains with Patrice Bergeron and Brad Marchand. These contracts outweigh the inflated salaries of David Krejci and especially David Backes, yet the Bruins STILL have a lot of cap flexibility. If William Nylander thinks he is worth more than David Pastrnak, he may not be watching much hockey lately.

Long story short, the Bruins have a gem in Pastrnak. Patrice Bergeron will always be the best all-around player on the first line, but Pastrnak is quickly surpassing him and Marchand as the most dynamic offensive threat on that line.

Just look at his numbers and highlight-reel goals and dekes from the last two seasons. Aside from his skill, Pastrnak has developed a two-way game, and isn’t afraid to hit or go to the dirty areas, going all-out for this team; he has quickly blossomed into a leader for this Bruins team in many ways. What more could you ask for? David Pastrnak is the NHL’s newest superstar; protect him at all costs.

Patrick is a sophomore studying journalism at Boston University’s College of Communication. Patrick is both the Men’s and Women’s Ice Hockey editor for WTBU Sports, writing, broadcasting, and overseeing articles about each team. He aims to cover the NHL and the Boston Bruins for a living and to become a hockey insider. From Lynn, Massachusetts, Patrick is a graduate of Malden Catholic High School (’18) and is a huge Boston sports fan, avid golfer, and hockey fanatic. His favorite teams and athletes include, the Bruins, the New England Patriots, Tiger Woods, and Mark Scheifele. Co-host of the podcast, The Duck Boat Report, at WTBU Sports, and writer for Black ‘N Gold Hockey. He writes columns on the PGA, Bruins, and NHL for WTBU Sports. Patrick is also a Francis Ouimet Scholar. Find his author page at WTBU Sports, follow him on Twitter @PatDonn12, and check out his portfolio (patrickdonnellyportfolio.wordpress.com). View all posts by Patrick Donnelly