BOSTON– The USCHO released their first men’s hockey poll of the 2018-19 season and the Boston University Terriers are ranked 8th.

First year head coach Albie O’Connell and his Terriers will start the season in the top-10 for the fourth season in a row.

There are some familiar foes who join the Terriers in the first top-10 of the season. Three other Hockey East teams have been voted into the top-20; Providence (5th), Boston College (12th), Northeastern (15th).

The Terriers square off with the Providence Friars on October 26 at Agganis Arena. Then 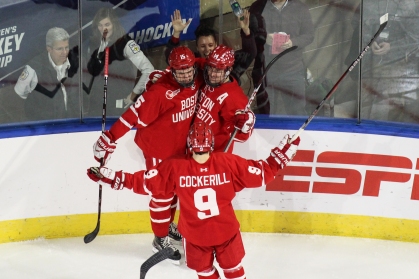 Outside of Hockey East, the top-10 features some familiar faces the Terriers faced in the 2018 NCAA Tournament. The University of Michigan, who defeated the Terriers in the second round start the year ranked 4th. While Cornell University, who the Terriers knocked out of the tournament in the opening round sits just in front of BU at 7th.

The regular season doesn’t begin for O’Connell and his Terriers until October 12th when they travel to Minnesota State Mankato for a two-game weekend series, but the Terriers will host the Acadia University Axemen (Nova Scotia) on Saturday October 6 at the Agganis Arena.