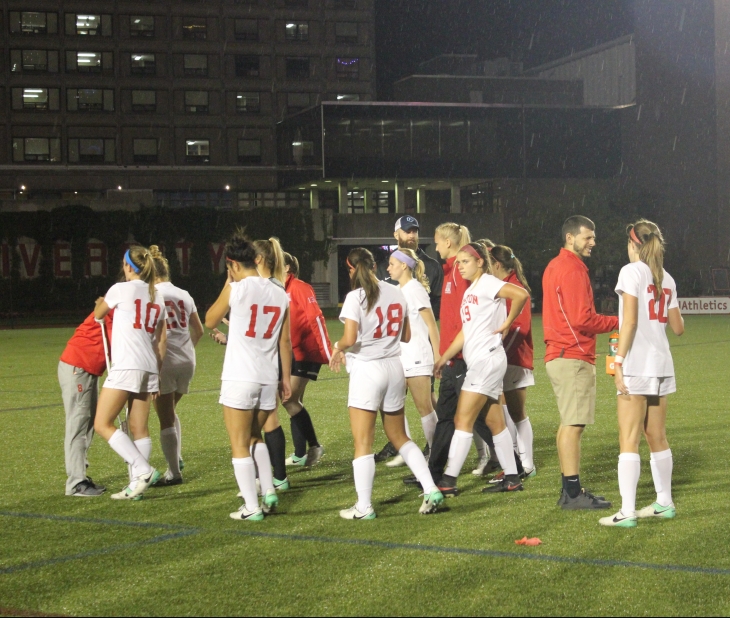 The Terriers are currently 1-7-1. On Thursday, they suffered their heaviest defeat in almost three years in a 4-0 annihilation at West Virginia—a match in which they were also held shotless. The Scarlet and White are being outscored 7-16, an average of less than a goal per game on their end, and outshot 100-126. Their 16 goals conceded are the most in the Patriot League.

American are 5-2-1, in stark contrast to the 1-7 record with which they arrived in Boston last year. The Eagles are undefeated at home, averaging 1.5 goals per game (1st in PL) while conceding 0.57 per game (2nd in PL).

Senior Yari Bradfield is the Patriot League’s joint leader in goals (5) while maintaining the number two spot in points per game (1.38). Other major threats in blue and white include Gabriela Maldonado (4 goals, 2 assists) and Audrey Denkler (4 assists). Meanwhile, sophomore goalkeeper Ryleigh Brown has started six of the Eagles’ eight matches, resulting in three shutouts (T-3rd in PL), four goals allowed (T-1st in PL), and a 0.61 goals against average (2nd in PL).

On the BU end, sophomore Anna Heilferty continues to lead the way with a team-high two goals, six points, and 21 shots. As with last season, offense remains very much a team effort as nine different Terriers have contributed points thus far. Between the posts, sophomore Amanda Fay, freshman Morgan Messner, and junior Emma Heil have combined for 36 saves.

The status of key forward McKenna Doyle (1 goal, 1 assist) remains unknown, with the senior having yet to make a return to the roster after sustaining a concussion in BU’s 3-0 win over UConn earlier this season. Her firepower appears sorely missed, given the Terriers have yet to score since then.

By overall Patriot League history, the Terriers should win comfortably. They boast an overwhelming successful 36-5-3 mark in conference slates, and have posted at least five league shutouts every year since joining the league in 2013. They have never allowed more than two goals in a Patriot League contest.

With a 5-0-1 record, BU remains undefeated in the all-time matchup. Both matches played at American’s Reeves Field have gone to overtime.