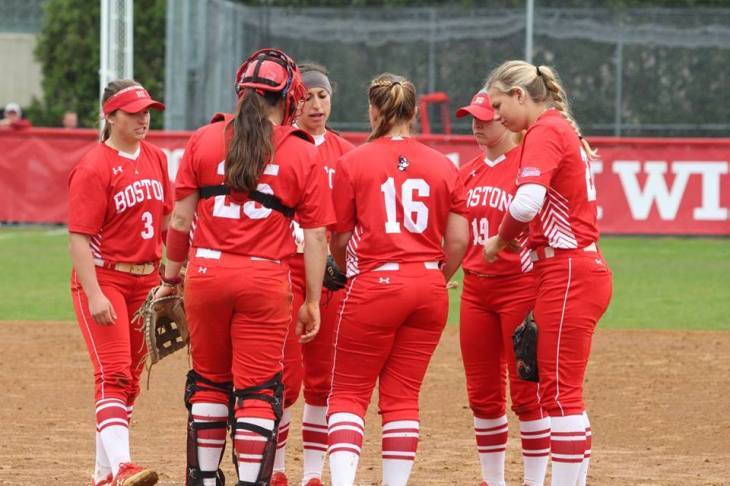 A five-woman senior class is leaving a legacy for Boston University softball. Every year teams say goodbye to their seniors, but this year’s class has been the backbone of the program since embarking on their respective collegiate careers.

This weekend, they’ll have a chance to extend it even longer as the Terriers (36-18, 15-3 Patriot League) will host the 2018 conference tournament after winning the regular season Patriot League title for the first time in the school’s tenure in the conference.

“Since we are the only team that gets to wear ‘Boston’ on our chests in the entire city besides the Red Sox, we have so much pride,” said senior first baseman and All-Patriot League Second Team member Kaitlin Sahlinger. “To be able to host it with our family and friends there is going to make it really special.”

Third-year head coach Ashley Waters made certain to express the value of the 2018 senior class.

“It’s a really special group, top to bottom,” she said. “Whether its personalities or talent, I love all five of them, and I think that they each bring something different to the team.”

2018 Patriot League Defensive Player of the Year Brittany Younan (.306 AVG, team-high 10 triples, 21 RBIs, team-high 21 walks) earned a fifth-year of eligibility after a season-ending injury least season. A stalwart at the top of the order for the entirety of her career, the shortstop and lead-off hitter set the Patriot League single-season triples record with her 10th three-bagger of the campaign.

Senior right fielder Emma Wong (.335 AVG, 22 RBIs, team-high 17 stolen bases) bounced back from a junior season in which she batted just .224, returning to her previous form that landed her on the All-Patriot League Second and First teams, respectively, in her freshman and sophomore year. She’s batted second all of 2018 and was named to the All-Patriot League First Team.

A fiery center fielder, senior Jilee Schanda earned the 2017 Patriot League Player of the Year as a junior and saw a 15-game hitting streak earlier in the 2018 season. She’s raised her average every season, earning All-Conference First Team honors her sophomore and junior years, and continues to impress in all facets of the game. Earlier this year, Waters gave the 2018 All-Patriot League Second Teamer (.315 AVG, 10 doubles, eight triples, 34 RBIs) some high praise.

Katilin Sahlinger plays a slick first base and smacked a trio of home runs in her senior campaign, including a walk-off bomb at home in early April. The Bellevue, Wash. native has started nearly every game the past three years.

Batting in the bottom third of the order most of the season, Sahlinger (.252 AVG, three home runs, 28 RBIs) got bumped up to fifth for the final two games of the regular season and responded with a homer in her last regular season at bat.

Waters said she moved up due to her “maturity.”

“In our lineup there is always opportunities with people on base and you’re always in a position to be a producer,” Sahlinger said. “Staying within myself, and I think honestly, when I was down in the eighth and ninth spots, it gave me some confidence. I saw some good pitchers there and have been able to work myself back up.”

There is no one more beloved on the team than Diana Parker. When she’s not on the field, she’s the first to catch bullpens – while junior and 2018 Patriot League Player of the Year Alex Heinen (.373 AVG, 12 doubles, 49 RBIs) gets geared up – or warm up outfielders. She’s also a prime ukulele player and story teller for cross-country road trips.

Parker defines a team player, evidenced by her being named a captain in her senior season.

“They all have different roles, and they own their roles, which is the best possible thing that you can have with team players,” Waters said.

The 2018 class began with nine players, but injuries and other reasons shrunk the class down to four. Younan earned a medical red shirt to make it five, and Sahlinger said the class is tight because of how much they’ve endured and experienced together.

“We grew together closer as a class and with the coaching staff and as a team,” she said. “These four years have been a heck of a ride, and it’s been great to share it with people that are not only teammates, but your best friends.”

Winners of 17 of 18 games and 13 of 14 conference contests to close the 2018 regular season campaign, BU hosts the Patriot League Tournament for the first time. The double-elimination tournament begins on Thursday with the Championship round scheduled for Saturday.

Freshman Ali DuBois (25-7, 1.77 ERA) turned in a stellar freshman campaign and should see a lions share of time in the circle during the tournament after winning both Patriot League Rookie and Pitcher of the Year awards. Classmate and southpaw Cali Dolfi (5-7, 2.34 ERA) figures to be the next option. Heinen, who started all 54 games behind the plate, brings a potent bat and led the conference in RBIs.

All of the seniors have NCAA Tournament experience. Younan went to the 2014 Tournament during her freshman season, and the entirety of the five-player senior class appeared in the 2016 NCAA Tournament.

They’re looking to get there once again, but know they have to take home the conference title first.

“Any team could win this, and they’re all great teams,” Sahlinger said. “This week we’re going to be focusing on staying offensive minded. Our defense has been solid and our pitching has been solid.

“Just continue that, and I think we’ll be alright.”

Arguably one of the best right sides of any infield in the nation, Kovac smacked a league-high 13 home runs and drove in 42 runs, batting at a .304 clip. She also had 14 doubles. Hadley’s all-around offensive game gave her season ending numbers of a .368 average with eight homers, 33 RBIs, 10 doubles and four triples. The Bison slugged a league-high 35 home runs as a team, with seven different players clearing the fence.

Sophomore Raeanne Geffert established herself as one of the top pitchers in the conference, amassing a 17-10 mark with a 1.94 ERA, including 13 complete games. In Patriot League play, Geffert totaled an 11-4 record with a 1.33 ERA including three complete-game shutouts.

Reigning champ Lehigh (22-24-1, 11-7) enters as the third-seed. The Mountain Hawks earned a 2-1 series victory over Holy Cross last weekend, taking both ends of a Saturday double-header before falling Sunday in their regular season finale.

Fourth-seeded Army West Point (26-26, 10-8) enters the tournament on a four-game winning streak. Freshman Courtney Springman (16-14, 1.77 ERA) is one of the most dominant pitchers in the conference. She’s tossed 20 complete games in 28 starts and holds a 1.64 ERA with nine complete games in 11 starts in Patriot League play.

Junior Carrie Reilly (.345 AVG, 4 home runs, 28 RBIs) leads the team in hitting and RBIs, and is one of five Army players batting above .300. She batted .382 in conference play, and closed the regular season on a seven-game hitting streak.  Sophomore outfielder Amelia Trotter is the team’s leading home run hitter and base stealer, belting five bombs and swiping bags in 14 of 15 attempts.