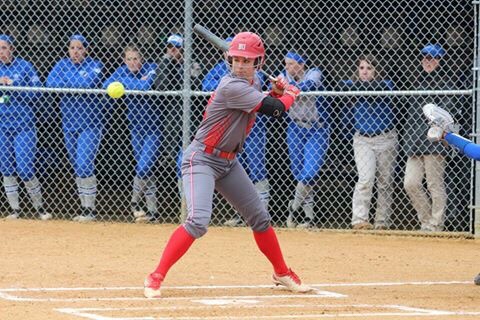 BOSTON — It’s been a season of firsts for Madi Killebrew, and on Wednesday afternoon she slapped another career first to pace the Terriers on a big offensive day.

The junior third baseman punctuated a 10-1 rout of Central Connecticut State with a 3-run blast over the right field wall, and tagged another 3-run shot over the left field wall in her first at bat of the second game in leading the Terriers to a doubleheader sweep. Her first two career homers came in a four pitch span.

“That’s what I expect out of Maddie, she absolutely has the ability to have some whip, have some torque, put the ball at the fence, put the ball over the fence,” said head coach Ashley Waters. “When I see that, I see a kid doing what she can do. It’s not shocking to me, it’s not surprising to me, but I am happy for her to have those moments today.”

But it was Kaitlin Sahlinger who was the hero in game two, on a 1-2 count in the bottom of the eighth inning, she cleared the right-field fence for a walk-off homer and a 12-9 victory.

In a game where BU relinquished an 8-3 lead in the sixth, they tied it in the bottom half of the inning on a homer by senior center fielder Jilee Schanda.

“This is Jilee’s time. Right now,” Waters said. “You look at your watch and this is when she turns it on.”

Entering the game with 12 RBIs, Killebrew corralled eight on the afternoon from the clean-up spot. The Terriers (22-17, 4-2 Patriot League) put forth a terrific offensive performance in which 10 different Terriers reaching base, totaling 27 hits.

“It’s nice to see some power numbers, people coming up in different situations and executing,” Waters said. “Offensively, if we didn’t have that today it would have been a different turnout.”

BU opened with three runs in the bottom of the first inning, highlighted by back-to-back RBI knocks from junior Alex Heinen and Killebrew.

“I was really impressed with what she did today, I was really excited,” Waters said of Magane.

After striking out the side in the first inning, Magane worked herself out of a situation with runners in scoring position in the in the top of the fifth. The jam came after allowing just one earned run. 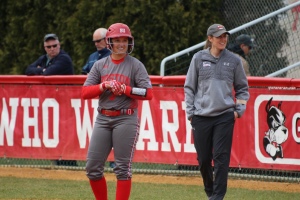 The Blue Devils (14-22) struck first in the first game on an RBI double by catcher Brittany McNulla, but Killebrew’s homer sparked a 5-run bottom of the first inning. Freshman Marina Sylvestri picked up her first career RBI as the Terriers batted around on starting pitcher Alex Casañas.

Emily Sargent (7-10) relieved and got senior shortstop Brittany Younan to fly out to end the inning. She would finish the game.

Freshman Ali DuBois (15-6) earned the win in the comeback, striking out a career-high 10 batters. Classmate Cali Dolfi and sophomore Lizzie Annerino would relieve before DuBois re-entered in the top of the sixth and finished the contest. Schanda added her tying drive in the bottom half of the frame.

The Terriers loaded the bases with no outs in the bottom of the eighth, but ceded a double-play. Sahlinger blasted the winner after going 0-for-5 with four strikeouts and a hit-by-pitch on the afternoon.

Waters said she asked Sahlinger if she wanted the last at bat and was met with a firm yes.

“You can have the worst day, and you can live for one moment. It was pretty cool for her because I know she was struggling and was a a little frustrated,” Waters said. “I give her credit, she got in there down two strikes and she stayed offensive.”