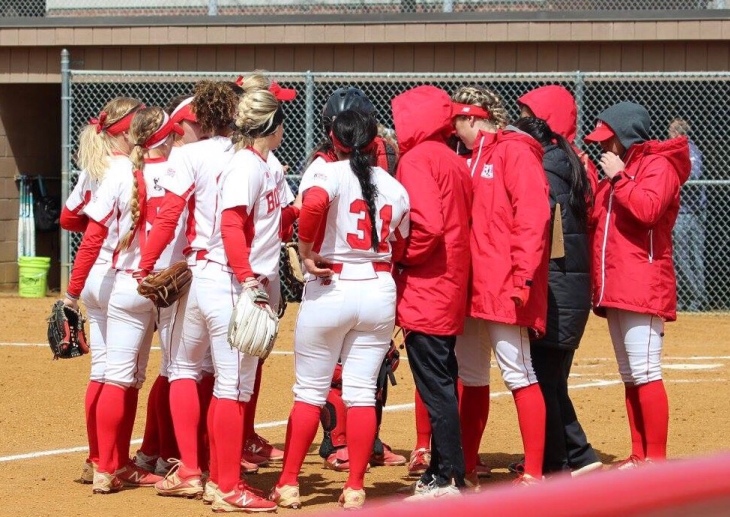 A softball team can never have enough quality pitchers. Without a doubt, the 2018 Boston University squad is reaping the benefits of great depth in the circle.

Freshmen Ali DuBois and Cali Dolfi have been dominant early in their collegiate careers. Overall, the pitching staff is young, made up of freshmen and sophomores.

DuBois, Dolfi, classmate Maya Kipfmiller, and sophomores Kali Magane and Lizzie Annerino’s efforts have led the Terriers (16-14) to a league-best mark in Earned Run Average by nearly one run per game. The stat becomes even more impressive when you see that BU are owners of the most innings pitched of any staff in the conference.

Third-year head coach Ashley Waters confirmed this is the deepest staff in her tenure. In the past the staff had been small; this year, she made a concerted effort to improve it.

“When you looked at the team as a whole we had a short staff, we always had two pitchers,” Waters said. “It was my priority to put the pitching piece at the forefront and try to build a team around that. In a 56-game season with injuries and with the amount of innings they throw, it’s good to have four or five arms, having people that can step in and take different roles.”

Dolfi, a lefty from Galveston, Texas, is utilized in a relief-type role. Of her 17 appearances, 11 have come out of the bullpen. She owns a 2.27 ERA across 63.2 innings, and has surrendered just 11 walks.

Waters was looking for someone to fill the reliever role, and Dolfi earned it.

“I was hoping that there was someone to come in behind people and be confident in a situation that might be a little bit tough,” Waters said. “She’s been put in some situations where it’s first and second with no outs or bases loaded with one out. She’s very collected, she’s very calm.

“She knows what she’s great at and she embraces it.”

Her top performances of the young season have come against formidable opponents. Against 21st-ranked Long Beach State, Dolfi held the 49ers to just one unearned run in the 1-0 loss, scattering six hits over seven-plus innings. She also turned in 6.2 scoreless innings in a 6-2 win over Colorado State, and a complete-game shutout at San Diego State. Dolfi most recently struck out four in 2.2 innings of work against the University of Massachusetts, and held Iona to just a hit and one walk in a five-inning 8-0 shutout win.

Dolfi said she is more comfortable pitching in relief as it’s a role she’s used to.

“I’ve come to love it,” Dolfi said. “I really personally enjoy coming in after people and finishing games. I honestly think I am better in that position.”

In the 7-4 victory over UMass, Dolfi relieved DuBois after giving up four earned runs in 4.1 innings. She said it’s helpful having Dolfi right behind her.

“It definitely takes the pressure off a lot because I don’t have to be perfect,” DuBois said. “I know there are more people that won’t be having a bad day at the same time.”

DuBois, a dropball pitcher, leads the Terriers and the entire Patriot League with nine wins, owning a 10-4 mark with a 2.49 ERA over a team-high 87.0 innings. Her best performances also came against some of the nation’s top talent.

The righty from Torrington, Conn. hurled a complete game and did not surrender an earned run in a 6-2 victory against Northern Illinois on opening day. DuBois also tossed a complete-game shutout in a 3-0 win over Michigan State, a complete game in a 5-2 win over San Diego State in which she gave up only one earned run, and she pitched four scoreless in a 10-2 drubbing of Binghamton.

Over the past weekend, DuBois accrued four winning decisions in the Terriers six victories, including a complete game five-inning shutout over Iona.

The duo is joined by a pair of strong sophomore pitchers. Annerino is near the top of the conference with a 2.31 ERA while Magane anchored the staff last year, throwing 155.0 innings in 31 appearances with a team-high 13 wins. Magane started five games in 2018.  Kipfmiller has also made a trio of pitching appearances while starting five games as a hitter.

DuBois and Dolfi said the young staff is learning together.

“They really have started to make a culture with everyone supporting each other,” Dolfi said.

“We are all learning together because we’re pretty close and I think they had a much different experience last year, so we’re all learning what this thing is like together,” DuBois added.

A thinner pitching core over the first two years of Waters’ tenure is morphed into one of great depth. The one constant over the time is catcher Alex Heinen. The junior’s support has been imperative to the development of the staff.

“You know that she believes in you 100 percent all the time,” Dolfi said. “On and off the field she’s just an incredible teammate and incredible person.”

After winning all six of their games this past weekend, the Terriers turn to a road tilt at Boston College on Wednesday afternoon at 4:00 p.m. They’ll look to continue their eight-game winning streak.

“I think we definitely have a lot more confidence now,” DuBois said. “Obviously losing kinda sucks, but definitely having that win streak gives us a lot of confidence going into conference play.”