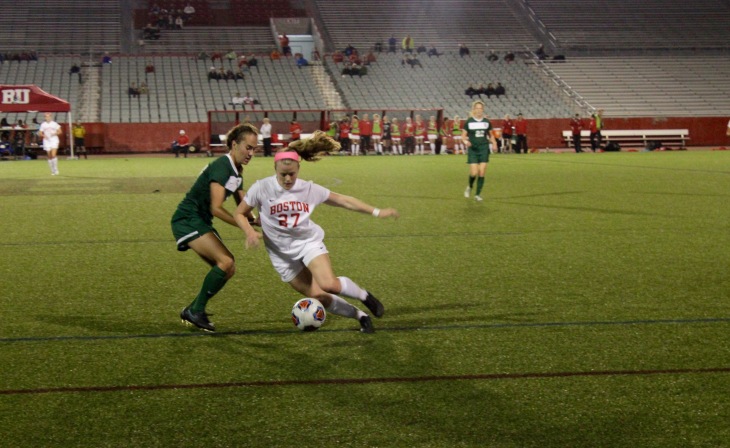 While most students at Boston University were getting readjusted to new classes and a new semester, Terrier women’s soccer freshman standout Anna Heilferty was in the midst of the trip of a lifetime.

The 2017 Patriot League Rookie of the Year spent late February and early March with the U.S. U-18 National Team, playing three games in the Women’s U-19 La Manga 12 Nations Tournament in Spain.

“It’s definitely a humbling experience, there’s a lot of good players out there,” Heilferty said. “It was fun to get the experience and be able to come back and still be in school.”

Luckily for Heilferty, her April 17th birthday was after the Jan. 1, 1999 cutoff, and being young for her class allowed Heilfety a spot on the roster. She was one of three current collegiate players on the team, along with Hannah Betfort of Wake Forest University and Hannah Cardenas of the University of Colorado. The rest of the roster has yet to enter the collegiate ranks.

“We were in contact with the National Team Coach and provided our recommendation and some video,” Feldman said. “Anna did all the heavy lifting, but we made them aware of her.

“She’s done the rest from there.”

Prior to the international friendly, Heilferty was invited to attend the U.S U-18 National Team training camp in Florida during early February. She earned her spot on the team after a strong performance in front of the U-18 coaching staff.

With a little guidance from sophomore teammate Ann Marie Jaworski, Heilferty said she was prepared for the trip.

“She was able to give me some background on it and what to expect going in which helped calm my nerves,” Heilferty said.

Putting on the USA jersey was something she says the program emphasizes to the team. The defining moment was the international walkout.

“When you put that on you’re representing the country and that’s what you’re playing for,” Heilferty said.

The Falls Church, Virginia native started all three games in the tournament at defense. The team went 0-1-2 in its three games against England, Norway and Denmark, but Heilferty said the experience was something she’ll never forget.

“It’s definitely a cool experience to see all the people it brings together,” Heilferty said.

In her first year on the Nickerson Field pitch, Heilferty led all Patriot League freshmen with a team-high five goals and added three assists. She helped anchor a Terrier defense that allowed less than one goal per game.

The Terriers have four spring games in April; although they are not a part of the countable schedule, they allow more time on the field for Heilferty to continue developing both individually and with her team. She said she wants to spend the spring season working on her fitness for the outside back position.

“It’s something I definitely need to work on, that’s a goal for the spring for me,” Heilferty said. “And, just playing every game to the very best of my ability and taking these opportunities where I get them.”

“I think she represents our philosophy of ‘you’re never finished developing,’ and she’s a great example of that,” Feldman said.

Up next in the National Team realm is a trip leaving on Saturday to Switzerland for a similar tournament. She said the first time she was nervous, but this time she is just excited.

“I want to have a consistency to me, playing each game and showing that I’m a dependable player,” Heilferty said. “I think it will definitely be easier this time with less nerves. It definitely helps out to have prior experience.”