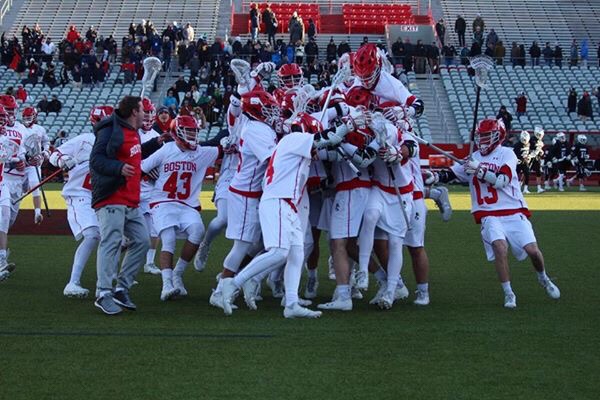 On the first Saturday of March 2017, the Boston University men’s lacrosse team handled Air Force, 8-6, on a bitter cold afternoon at Nickerson Field.

One year later, the weather is once again unsatisfactory on the BU campus as we usher in the month of March. The Terriers (3-2) need not concern themselves with the wind and rain, however, as they have escaped to Colorado for Saturday’s contest against the Falcons (1-3).

A season ago, BU fell behind, 2-0, in the first quarter while hosting Air Force. The Terriers exploded in the second and third frames, however, ripping seven unanswered goals to grip hold of a 7-2 lead.

The Falcons put a scare into BU with three goals of their own, but a score by senior attack Jack Wilson with 1:49 remaining in the game essentially sealed the deal for the Terriers as they escaped with an 8-6 win.

The insurance goal was Wilson’s second of the game. Attack mate Ryan Hilburn found success on the day himself, as three of the seven goals BU scored on their game-changing surge came from the senior’s stick.

Air Force boarded the plane to Boston in 2017 with a 3-2 record in tow. This season, the situation is much different as the Terriers visit Colorado Springs.

The Falcons have struggled mightily, outscored 44-24 over their first four games. The squad began the year on the wrong foot, pounded by Duke in their season opener, 18-4. A week later, Air Force welcomed Denver to the academy, and the result was an 11-5 defeat.

With another contest came a positive result, as the Falcons jumped into the win column on February 17 with a narrow 8-7 win over Marist.

Senior Nick Hruby virtually won the game single-handedly for Air Force. He scored six goals, including the game-tying tally with 1:36 left in the third quarter and the go-ahead score with 3:19 left in the game.

The double hat trick signaled another notch on Hruby’s belt. The Texas native has enjoyed a decorated career with All-Southern Conference First Team honors and three four-goal performances in 2017 on his resume.

Hruby has started every single game he has appeared in since arriving in Colorado, and BU knows his name well.

He scored four of his team’s six goals against the Terriers a season ago, and will be on the hunt for similar numbers on Saturday. Hruby will no doubt be the focal point of BU’s defensive gameplan, and expect the Terriers to throw multiple looks his way.

Freshman long stick midfielder Malcolm Glendinning received the task of guarding Navy high-octane scorer Jack Ray throughout last Saturday’s game, and he could be in line for shadowing Hruby this weekend.