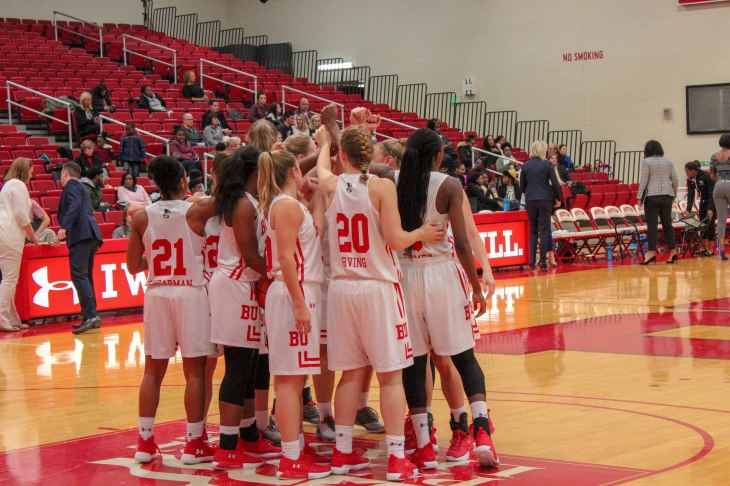 EASTON, Pa. – With 3:39 left in the fourth quarter, Boston University’s Corrine Williams (six points, five rebounds) knocked down a pair of free throws to give the scarlet and white a 41-38 lead. It was the last time the Terriers scored, as the Leopards of Lafayette dominated crunch time and sealed a 44-41 victory and the season sweep on Wednesday night.

As had been a common pattern in clutch moments this season, the ball ended up in the hands of sophomore Vanessa Edgehill (three assists, one steal), her team in desperate need of a three. The guard’s “tre-bomb” from straight away drew nothing as time expired, leaving BU with three straight defeats.

Connecting on shots in game-winning situations has been an area of trouble this entire season. The Terriers (10-16, 5-11 Patriot League) have now lost three of their last four games that were decided by a single possession.

“We need to start believing that we’re capable of closing these games out,” said Nia Irving. “We really need to take care of the ball and start building on whatever lead we have.”

Irving continues to be a bright spot among this disappointing back half of the season. Wednesday night, the Leopards had no answer for the sophomore forward, as she tallied 23 points and 12 rebounds.

However, turnovers continue to be Irving’s Achilles’ heel. She racked up five blunders in this one, just one shy of her season high.

The Fairfield, Maine native said she attempts to exploit her defender each night by picking on what they are weakest at. Against Lafayette, this included extending her range outside of the paint, which ultimately allowed her to record her sixth game in a row with at least 16 points.

“I’ve been trying to shoot a few more jumpers here and there so they can’t sag off of me so much,” she said.

Irving pulled off an impressive 8-of-13 shooting from the field and even sank her first three-point basket of the season on a top-of-the-arc bucket to beat the shot clock. However, the sophomore was the only Terrier with more than two shot attempts to finish over 50 percent shooting on the evening. BU as a team went just 4-of-27 during the entire second half.

Lafayette struggled to get the ball rolling on the offensive end as well. BU held the Leopards’ leading scorer, freshman Natalie Kucowski, to just eight points, short of her 11.6 ppg average. Co-freshman, Drew Freeland filled in the gaps, as she snagged a team-high 15 points to move her squad to 10-16 overall.

Only two games remain on the Terriers’ schedule. Sitting in the seventh spot in the Patriot League, it is likely the scarlet and white will host a play-in contest during the first round of the conference tournament.

“One advantage to a play-in game is that we’ll have some more experience playing in a playoff environment,” Irving admitted. “That should play into our favor.”

BU hopes that the spirit of Senior Day will get the squad back on track. The five seniors will be honored in the next and final home game of the season on Saturday, Feb. 24 against Army.

The Terriers kicked off league play back in late December with a 60-59 win over the Black Nights in West Point, N.Y. BU will aim to grab the season sweep inside Case Gym at 2:00 p.m.