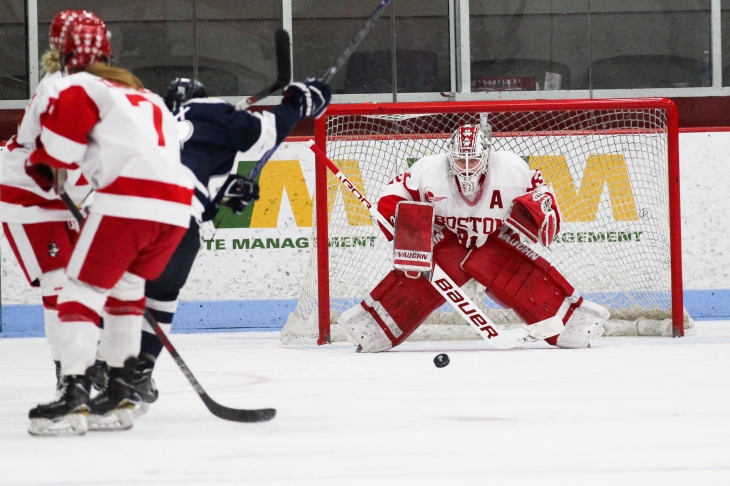 BOSTON — The Terriers celebrated their six-member senior class in style on Sunday by completing a weekend sweep of the UNH Wildcats. First defeating the Wildcats in Durham, N.H. on Saturday by a score of 2-1, BU followed up their road win with a convincing 2-0 win Sunday afternoon at Walter Brown Arena.

Leslie took command on Saturday, scoring both of the Terriers goals in the 2-1 victory. Freshman goaltender Corinne Schroeder made 25 saves in the win with the only goal against coming late in the third period when the Wildcats pulled their goaltender in favor of an extra attacker.

O’Neil lead the charge on senior night with a 33-save shutout of the Wildcats. Freshman Kristina Schuler scored the game-winning goal just 5:02 into the first period when she tipped home a point shot in the low slot from junior defenseman Connor Galway. Bach added an empty netter in the final minute to put the finishing touches on the game.

The sweep of UNH this weekend solidified a spot for the Terriers in the Hockey East Playoffs. As the sixth seed in the tournament, BU will be traveling to Orono, Maine for the first round. There, the Terriers are set to take on the third-seed Maine Black Bears.