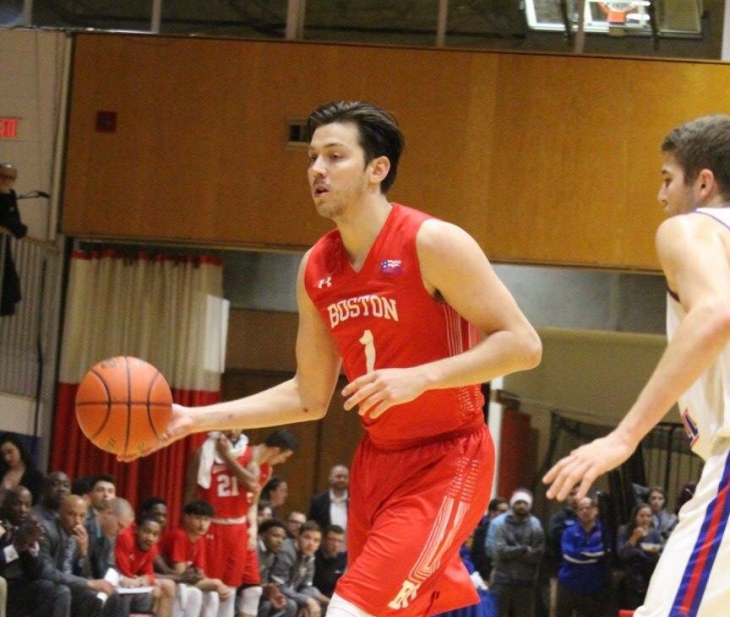 Practice at BU, something so familiar to Havener, will soon become a routine of the past. He will be honored along with classmates Cedric Hankerson, Will Goff and Eric Johnson prior to a tilt with Patriot League foe Navy.

With a bachelor’s degree in communications and a master’s degree in public relations in the works for the end of the first summer term, the Sarasota, Florida native will pursue jobs in the Boston Area while also undergoing labrum surgery. He said he is considering a professional career.

“I’ve been playing with a torn labrum this season,” Havener said. “It’s about half a year of recovery. I think in time it would be an interesting option [to play professionally]”

His game relies on athleticism. Whether it be his signature left-handed jump hook, a blocked shot into the stands or a thunderous dunk, Havener always brings an unparalleled vivacity to the court.

“Nick’s one of those guys, you say he’s got a high motor,” BU Head Coach Joe Jones said. “I love everything about that kid.”

After being in and out of the rotation as a freshman, Havener took a leap as a key cog during his sophomore campaign. He made 16 starts and saw an uptick in time, a career-high 21 minutes per game due to both improvement and injuries in the front court. As a junior, Havener again saw his role in flux, averaging 16.7 minutes per game.

In his final campaign, Havener has eclipsed his previous career high in scoring against a Division 1 team four times, highlighted by a 21 point performance on 9-of-13 shooting in just 18 minutes during a road victory at Lafayette on Jan. 24.

Havener also corralled a double-double, 16 points and 10 rebounds against hoops powerhouse University of Connecticut. He has shot better than 63 percent from the floor in his double-digit performances.

After starting 10 of the Terriers’ first 11 games, Havener’s role transitioned to coming off the bench after sustaining a foot injury.

He missed three-plus games due to a foot injury sustained early in a non-conference game against Harvard in late December and he missed a home victory over Loyola due to flu-like symptoms.

Havener played 26 minutes over his next four appearances while working his way back. Since Jan. 20 in BU’s 75-68 road win at Navy, he’s played at least 16 minutes in six of seven appearances.  Subtract the games when he was injured and recovering, and Havener is averaging 19.1 minutes, 9.4 points, 4.8 rebounds and approximately a block and steal per game.

While not eye-popping numbers, seven Terriers average over 7.5 points per game and no one more than 13.6 points per game. The even distribution is a testament to the system, to which Havener has fully bought into.

“Our team’s been faced with a lot of adversity this year like a lot of teams do,” Havener said. “We’re fighting every single day to push through it and be the best team that we can be.”

Another factor is the emergence of sophomore forward Max Mahoney. While Havener started in beginning of the year, Mahoney did not. Now with roles reversed and Mahoney averaging 12.9 points per game, Havener has taken on a mentorship role while providing valuable minutes off the bench.

“After I got hurt Max really stepped up his game and he’s playing like one of the best big men in our league,” Havener said. “I don’t think really anybody can stop him. [I’m] not necessarily taking a back seat, but playing with a player of that caliber has been awesome.”

Havener described Mahoney as a “brother” to him and enjoys competing with him daily.

“I love the kid,” Havener said. “We talk every day. Anytime I see that he needs to be more aggressive or anything like that I’ll tell him. I’m always there to reassure his confidence. I think he knows he’s one of the best big men in the league and he’s been playing like it.”

Jones added: “[Nick] had Nate Dieudonne, Nate was really close to him. Nick has done a nice job with Max. It’s great to see.”

Going into senior day, Havener and the Terriers (12-14, 8-7 Patriot League) look to sweep the Mids (18-10, 9-6 Patriot League) to better their chances at hosting a quarterfinal. BU currently sits tied with Lehigh for the fourth and final hosting spot, but a win over Navy would jump the Terriers into third.

“Any time we get a win I’m happy,” Havener said. “Obviously this one’s a lot more important than others in the past and we’re going to go out there with the same mindset we have every game.”

Greg Levinsky is a rising senior at Boston University studying journalism with a strong interest in sports reporting. He is currently a sports reporting intern at the Detroit Free Press. He is also a Sports Correspondent at The Boston Globe. Greg has interned for the Portland Pirates, WEEI and the Falmouth Commodores of the Cape Cod Baseball League in writing/broadcast capacities. Greg is a staff writer for WTBU Sports out of Boston University, covering an array of sports. He is also a broadcaster seen on the Patriot League Network, Ivy League Network and NESN. View all posts by Greg Levinsky