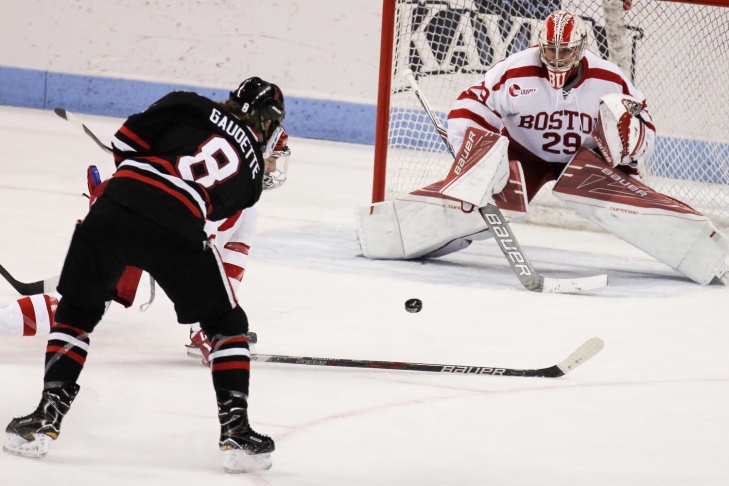 When the top two teams in Hockey East meet on Monday afternoon at TD Garden, there won’t be any conference points on the line. Instead, No. 11 Northeastern and No. 18 Boston College will battle for a spot in the Beanpot championship game.

“You can’t win the Beanpot Monday night,” Northeastern Head Coach Jim Madigan said. “You can position yourself to win it, so it’s just getting ourselves ready on that Monday night to give ourselves a chance to win it down the road.”

While history is on BC’s side, Northeastern (15-7-5, 11-5-3 Hockey East) is considered the favorite heading into this year’s tournament. The Eagles are 34-11 in 45 Beanpot meetings with the Huskies and 17-5 in the semifinal round, and Northeastern has not won the tournament since 1988.

Though BC (13-11-3, 13-6-0 Hockey East) currently leads Hockey East by one point over Northeastern, the Huskies are ranked 11th in the nation while the Eagles are 18th. Still, Northeastern captain Nolan Stevens said his team is blocking out the expectations.

“In the locker room we just try to worry about it game by game,” Stevens said. “I think we have a really good team that could make a run at this year. We’re not really worried about our history in the tournament as much as the 2018 Northeastern Huskies.

The close race between the two teams in Hockey East won’t be a factor as no conference points will be on the line, but BC Head Coach Jerry York knows the game will still have playoff implications for his team.

“We’re playing a team that’s competing with us for a league title but now it’s outside the conference,” York said. “Our out-of-conference record has put us in a bubble trying to make the NCAA Tournament. Besides the Beanpot, this is an important game for us to get toward the NCAA Tournament”

Northeastern’s high-powered offense, which is the best in Hockey East and seventh in the nation with 3.41 goals per game, is led by two of the nation’s top eight scorers. Junior Adad Gaudette is tied for the nation’s most points with 39 on 19 goals and 20 assists while senior Dylan Sikura has 36 points via 13 goals and 23 helpers.

The Huskies have also gotten contributions from sophomore defenseman Jeremy Davies (4 goals, 16 assists) and freshman forward Zach Solow (4 goals, 13 assists), as Madigan continues to search for a little more balance throughout his lineup.

“Our team is evolving and we’ve been consistent for most of the season, but we’re also looking for that secondary consistent scoring,” Madigan said. “We’ve got a lot of players who are contributing and are finding the right chemistry with our second, third and fourth lines.”

With a top unit consisting of Gaudette, Sikura and senior Nolan Stevens (17 goals, 27 assists), the Huskies’ power play leads Hockey East and is sixth in the country at 25.8 percent.

But even with one of the nation’s most potent offenses, both Madigan and York praised Northeastern’s defense as a major reason for the team’s success. Not only do the Huskies lead the conference in offense, but their 2.26 goals against per game is first in the conference as well.

“Everybody talks about their dynamic offense and their power play but when I look at their club, their defense has been the key,” York said. “Their goals against average is down, their freshman goaltender has given them a terrific boost. Their defense is underrated in my opinion because of their offense but we’re going to have to solve their defensive system for sure.”

For York’s squad, though, offense had been hard to come by. With 2.78 goals per game, the BC offense ranks just sixth the conference. Sophomore Julius Mattila has eight goals and 12 assists for 20 points while classmate David Cotton is not far behind at 19 points. Fellow sophomore Graham McPhee has also emerged as a threat, recording a team-high 12 goals.

“It’s kind of scoring by committee,” York said. “We’ve got three lines that do most of scoring but not one individual that really steps up. It’s kind of neat, though, to watch the contributions. We’re always trying to manufacture goals but we’ve got a really solid defense. Our effort has been there from the start of the season.”

Despite being tied for sixth in Hockey East in defense, York said his team’s defensive play has been solid all year, anchored by junior captains Casey Fitzgerald and Michael Kim and sophomore goaltender Joe Woll. The Eagles’ penalty kill is fourth in the conference at 81.7 percent, a unit that will have its hands full with Northeastern’s power play.

The goaltending matchup will likely feature one of last year’s impressive rookies in Joe Woll against one of this season’s top freshmen Cayden Primeau. Woll’s numbers have fallen to a 2.74 goals against average and .901 save percentage for BC while Primeau’s 2.01 GAA is best in Hockey East and his .926 save percentage is second to Maine’s Jeremy Swayman.

The two teams split a pair of games late in the first half of the season, with the road team winning each contest. BC scored the first four goals of a November 18 game at Matthews Arena and Woll made 27 saves for a 4-1 Eagle win. But Northeastern’s offense could not be quelled a few weeks later, as the Huskies scored five times before the halfway point of the contest and coasted to a 5-2 victory, with Primeau turning aside 26 shots.

“It’s a huge experience and opportunity for teams to really get going and take strides,” BC captain Casey Fitzgerald said. “Especially this year, all four teams are in such a tight race and it’s so competitive, so that just makes it that much more exciting.”