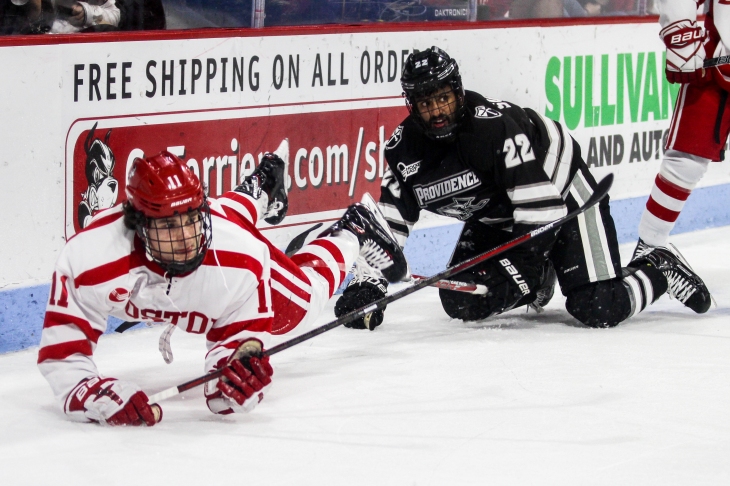 After a 9-3 drubbing of the University of Massachusetts – Lowell in early December, the Boston University men’s ice hockey team endured a lengthy month off before they returned from break with a shutout loss to No. 20 Maine. However, against the Black Bears, a slew of Terriers were returning on a quick turnaround from the World Junior Tournament.

Some of BU’s most integral cogs, including Brady Tkachuk and goaltender Jake Oettinger, were back in scarlet and white just hours after returning from Buffalo, N.Y., something that knocked the Terriers off their game.

“I made a huge mistake, I never should have played those guys. I left the rink on Saturday so frustrated with myself for playing them,” said BU Coach Dave Quinn. “My number one responsibility is to put us in a position to win hockey games and I didn’t do that on Saturday night.”

With last weekend’s loss behind them, Coach Quinn and the Terriers will have the chance to reverse course with two contests against stout Hockey East opponents. On Friday night the Terriers will travel north to Durham, N.H. to square off with the University of New Hampshire before returning home on Saturday to host No. 11 Providence.

This weekend will be familiar territory for the Terriers, who have already skated three times combined against their upcoming opponents. Providence (14-7-1, 7-4-1 HE) dueled with BU a month into the season as the two teams split their extended home-and-home series. The Wildcats (9-9-2, 4-5-1) pose a more peculiar matchup, as they have fallen back to earth after an explosive start to the year; during that successful stretch, UNH was ranked No. 9 when they came to Agganis Arena, before the Terriers dispatched them, 4-0.

“All three of us are different teams. UNH certainly got off to that great start, they’ve kind of struggled a bit since then. Providence is playing good hockey right now,” Quinn said. “I don’t think there’s a great team in our league, I think there’s a lot of good teams and these are two of them.”

With Hockey East log jammed towards the top, just four points separate the Terriers from a second-place tie in the conference – something they can capture this weekend. The Friars stand just two points above BU in fourth, while the Wildcats dwell a few slots down in eighth place.

The biggest issue for UNH has been their scoring, which has produced just 23 goals in Hockey East play – the second fewest in the conference. Overall, the Wildcats scoring is comparable with the rest of the league, as they’ve totaled 60 goals on the season – as many as BU. And while the offense hasn’t been there for the Wildcats in conference play, their defense has been contrastingly up to the task.

In ten games against Hockey East opponents, the Wildcats have allowed 26 tallies, just one more than league-leading Northeastern. Backstopping UNH this year again has been senior net minder Danny Tirone. The Trumbell, Conn. native currently posts a .916 save percentage in 20 games this year, four of which have been shutouts. Most recently against Brown, Tirone stopped 35 of 39 shots at home.

Providence is a similarly defensive squad, with Head Coach Nate Leaman imploring a smothering style of play in his team’s own zone. The way the Friars clog up the middle of the ice and effectively get into their opponents’ shooting and passing lanes has been a hallmark of Leaman’s coaching style, and it’s paid dividends this season.

After some early season struggles, Providence has rattled off wins in six of their last eight games. Similarly to UNH, the Friars have also allowed just 26 goals in Hockey East play, though their offense has been much more potent, striking for a league-best 73 scores overall this season.

“We’re going to have to…play with energy and passion and compete. And if we do that we always have a chance to win because I think we have a talented group,” Quinn said. “We’ve just got to do a better job of playing more winning hockey.

The Terriers will look to reignite an offense that has the second most conference goals in Hockey East with everyone back to full strength. While the team has not had much time to practice thus far as a bout of the flu ran through the Terriers, according to Qunn, some rest time has given BU a great opportunity to recuperate for their tough task this weekend.

Friday night’s tilt will get underway at 7 p.m. at UNH’s Whittemore Center, while Saturday evening’s contest begins at 5 p.m. at Agganis Arena.