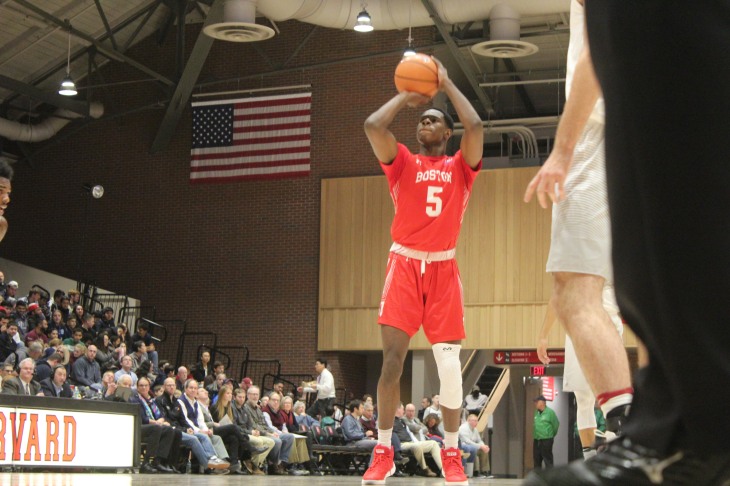 Non-conference play may be a time for experimentation, but for the Boston University men’s basketball team it was all about finding out who they were.

“We’ve been preparing to be consistently good,” said Boston University Head Coach Joe Jones. “That’s what we’re trying to do.”

The time for experimenting has come and gone as the Terriers (4-7) open up their Patriot League slate on Friday night when they host the Army Black Knights (7-4).

“There’s so much more at stake,” Jones said. “There’s definitely some added energy that comes with the start of the league season.”

With just 11 players available for the remainder of the season, Jones said he had to make significant changes to his game plan, and it has taken his team time to adjust.

Senior guard Cedric Hankerson leads the team averaging 13.2 points-per-game. Sophomore forward Max Mahoney is the only other Terrier scoring in double figures. The six-foot-eight forward is up to 11.2 PPG, including averaging 16.0 PPG over the Terriers last five contests.

“If you look at our offensive numbers, they’re as good as they’ve ever been since I’ve been here,” Jones said. “We’re running good offense, we’re getting good shots. I’ve been very pleased with that.”

Jones said his main disappointment comes on the defensive end.

“We’ve been just awful,” Jones said. “Defensively is where we’ve struggled, and I’ve got to put that on myself and not my players. This is probably one of the worst defensive teams that we’ve had so far since I’ve been here. At least that’s where we are right now.”

BU last played at Harvard, falling 74-63. Mahoney scored a team-high 16 points, including eight points from the charity stripe. Freshman guard Javante McCoy added 15 points of his own. Both players came off the bench.

The Black Knights have won two consecutive contests, and have not played in nearly two weeks before facing the Terriers. Army last ousted Air Force, 79-54, in a game played at Madison Square Garden.

Junior guard Jordan Fox leads the Black Knights at 16.4 PPG, and is shooting above 50 percent from beyond the arc. Sophomore forward Matt Wilson holds averages of 12.3 points and a team-best 6.2 rebounds per game.

Freshman forward Alex King is a threat off the bench, averaging 10 points per contest while his minutes come in at just 17.3 per game.

The teams split the series last year, with each side taking the game on their home court.

Jones said Army’s pace is something to keep an eye for. They have 22 players on the roster and like to play uptempo, faster than that of the Terriers.

“Their tempo and pace is going to be very, very high,” Jones said. “If we can’t control the game, we’re gonna have a hard time because they’re going to play at a place that they’re really comfortable at playing at, which is not a pace that we play at.”

BU looks to halt its losing streak at three games, the team’s second of such slide of the season. A win on Friday would leave a positive spin on the calendar year as the Terriers begin conference play and their quest for a Patriot League title.

“We have to do a lot of things in order for us to be what we want to be in terms of us being able to win the game,” Jones said. “We’re going to have to control the pace of the game, and that’s not going to be easy.”