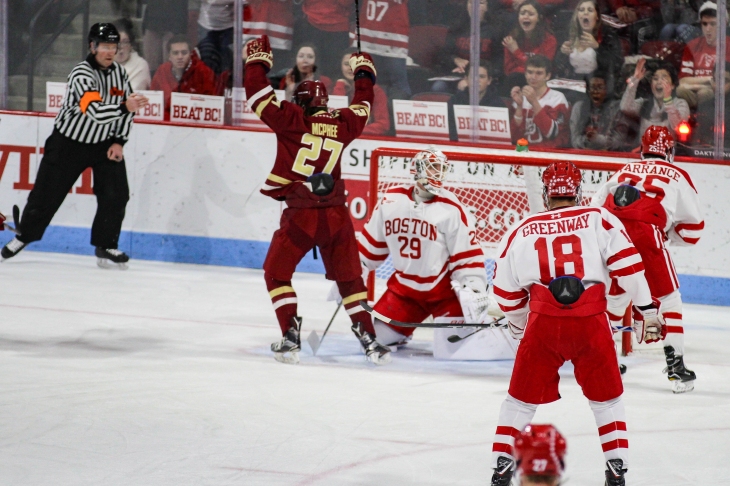 BOSTON PROPER — While Saturday’s series finale between Boston University and No. 15 Boston College played out much differently than the night before, the script was still a familiar one for the Terriers.

BU (7-9-1, 5-5-1 Hockey East) garnered 37 shots on goal, ten more than its opponent, but found twine just once, and while the Terriers often saw chances disappear at the hands of BC goaltender Joseph Woll, the Eagles (9-6-2, 9-2-0 Hockey East) did not waste any of their opportunities in a 4-1 win.

“I feel like we’ve been in here too often with the same responses and same summaries,” BU Head Coach David Quinn said. “There is such a fine line between winning and losing at this level and we just haven’t crossed that line yet consistently enough.”

BU entered the middle frame in a familiar spot, as the Terriers trailed 2-0 just as they had early the night before, and they responded in similar fashion. BU dominated the early portion of the second and finally cut the deficit to one midway through as freshman Shane Bowers deflected classmate Kasper Kotkansalo’s shot past Woll.

It seemed the momentum was fully back in BU’s favor, as they had outshot BC 16-3 at one point in the second. But the Terriers couldn’t take advantage, and just like so many times this season, BU surrendered that crucial next goal.

Casey Carreau’s drop pass connected with Ron Greco at the top of the left circle, and he fired a wrister into the top right corner of the goal for his third tally of the weekend, this time restoring BC’s two goal cushion.

“I thought we really started pushing the pace and doing the things we were going to need to do to have success in the second period,” Quinn said. “The third one was a backbreaker. That was a tough one to overcome.”

Like the second period, BU again controlled play in the third, outshooting the Eagles 13-3. As time ticked off the clock, the Terriers still did not have an answer for Woll, so Quinn elected to pull Oettinger in favor of an extra attacker with 3:41 still to play.

BU then earned a power play, but while Woll kept BU at bay on the 6-on-4, Graham McPhee found the vacated net on the other end to seal the win.

“I thought we really played well to start the third,” Quinn said. “We had some glorious chances and we just weren’t able to capitalize on them. Give them a lot of credit, they played a smart third period.”

For the second straight night, BC was ahead by a pair of goals in the blink of the eye. Connor Moore’s centering feed deflected off the stick of BU defenseman David Farrance and past sophomore goaltender Jake Oettinger to give BC the lead.

Then just 44 seconds later, sophomore Chad Krys attempted to move the puck across the Eagle blue line, but David Cotton clamped down on the sophomore defenseman to work the puck loose. Cotton then broke in alone on Oettinger, and after his initial chance was denied, he buried the rebound to extend BC’s lead to two.

“Unfortunately two costly mistakes early put us down 2-0 again,” Quinn said. “It’s tough to dig yourself out of that hole when you have a first-place team in here with a goalie like that.”

Woll made 36 saves while allowing just the one goal to earn his seventh win of the season, and after a poor performance on Friday, the goaltender’s response was key for the Eagles.

“I think you go into each game with the same mindset,” Woll said. “I think the game got a little bit out of hand last night and I didn’t play as well as I could have. I made it a point to show up tonight and make sure I played a full 60 minutes and give my team a chance to win tonight.”

The sophomore’s effort was highlighted by the number of saves he made on chances from in tight, often denying junior Jordan Greenway and freshman Brady Tkachuk on the doorstep, players who frequently make their presence known in the blue paint.

“They’ve got some of those guys that can get in those dirty areas,” Woll said. “Greenway and Tkachuk, I’ve played with and against for years now and I know the kind of way they play. That’s their game and it’s a pretty effective game, especially as they move up to the pro level. They’re hard and heavy and they’re a really good team so it was a good win for us.”

For BU, though, the loss was yet another in a series of inconsistent outcomes. The Terriers have now alternated wins and losses in seven straight contests, and the results have been on opposite ends of the spectrum. In their seven wins this year, BU’s margin of victory has averaged 3.29 goals, but in their nine losses, they’ve been outscored by 2.78 goals per game.

“Sometimes it’s puck luck, sometimes it’s finding chemistry, sometimes it’s just youth getting better.,” Quinn said. “If we weren’t getting the chances then it would be a lot more alarming. I think we’ve been more opportunistic over the past three weeks, and that bodes well for us moving forward.”

BU will finish off the first half of the year with a home-and-home series against UMass-Lowell next weekend, a team that has had its share of ups and downs this season as well. For Quinn and the Terriers, the series will be an important one before the semester break, as they will look to ride some momentum into the long layoff.