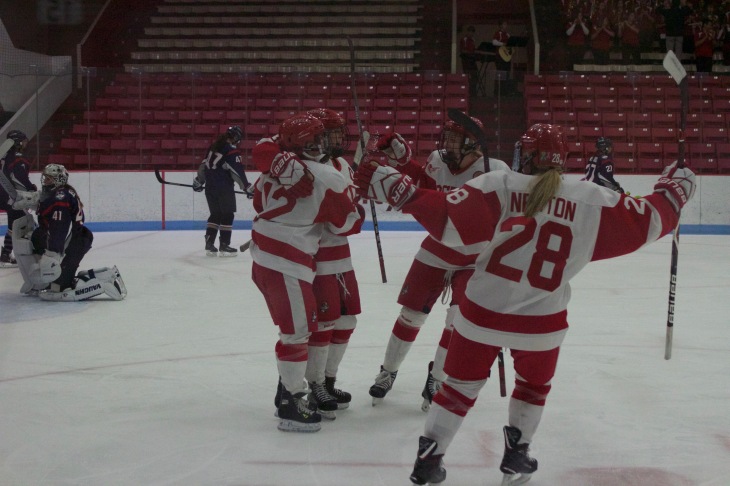 BOSTON — The Terriers look to get back on track in Hockey East play as they host the University of Connecticut Huskies on Friday at Walter Brown Arena.

The Terriers should have some confidence going into Friday night’s matchup against UConn; as far as conference play goes, the Terriers only Hockey East win this season came against this same Huskies team on October 22. BU prevailed 6-2 in that contest.

Both these teams are much better than their current records display. The Huskies hold a 0-2-1 record in Hockey East play, but boast an overall record of 4-3-2. This UConn team does not rely on any one line to carry the load offensively. Points are spread out almost evenly between their top two lines of forwards. That means that the Terrier defensive core is up for quite a challenge.

The Terriers will look to ride the hot hand in net, Corinne Schroeder, who has started the last four games for the Terriers and posted a 2-1-1 record. The freshman net minder has accrued a stellar .940 save percentage along the way. Schroeder is also looking to follow up what was her first career NCAA victory against UConn with another strong performance.

In addition, Coach Brian Durocher will look to keep his power play clicking. The team has scored six power play goals in their last five contests. With their special teams leading the way, the Terriers have been playing much more efficiently since starting the season 0-4-1.

Since their last matchup with UConn, the Terriers’ leaders have shouldered the load offensively. Senior Captain Rebecca Leslie and senior Assistant Captain Victoria Bach have lead the way by commanding the offense with finding good scoring opportunities, creating odd-man rushes and filling the net on their own. Leslie has notched six goals in her last five games while Bach has hit her stride by posting 10 points in her last five contests.

Friday’s game will be the only one on the weekend for BU; the Terriers will travel to Burlington, Vermont next weekend for a two-game series with the Catamounts. Puck drop on Friday is set for 7 PM at Walter Brown Arena.