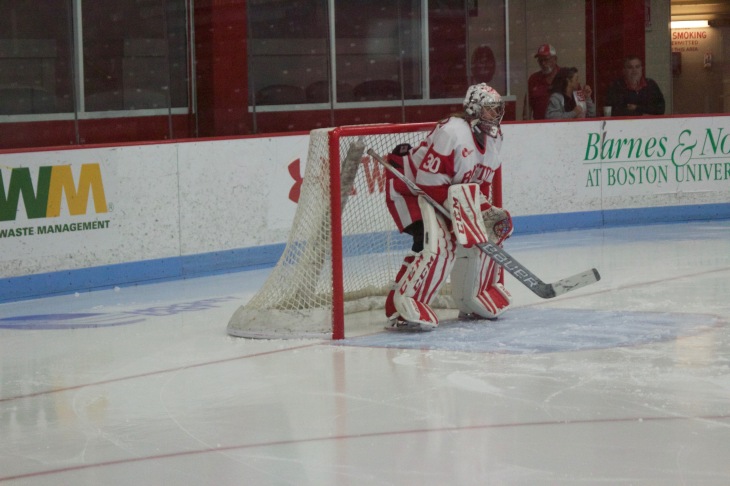 BOSTON, MA  —  After taking a two-goal lead early on Sunday afternoon against New Hampshire, the Boston University women’s ice hockey team was unable to hold their lead and ultimately conceded twice in the third period to destine the fixture to a 2-2 tie.

Victoria Bach gave the Terriers the lead after a mere 18 seconds of play. The senior quickly found a pass from Rebecca Leslie before firing a snapshot from the right circle that flew past Wildcat goaltender Ava Boutilier into the roof of the net.

Freshman winger Kristina Schuler netted a power-play goal later on in the opening period to double BU’s lead. Schuler sent the puck on net from the left side and it deflected off the skate of a Wildcat and drifted past a scrambling Boutilier to give the Terriers a 2-0 advantage.

BU went on to shut New Hampshire down completely in the second period, allowing the Wildcats just six shots. Boutilier made some impressive saves to keep the hosts in the game, but the tides still looked to be moving well in the Terriers’ favor.

That all changed in the third period. The worries for BU began five minutes into the stanza, when New Hampshire’s Meghara McManus pounced on a favorable deflection to flick the puck past Terrier net minder Corinne Schroeder and halve the deficit. With seven minutes remaining in the game — and under mounting pressure from the Wildcats’ 15 shots — BU then caved once more; receiving a pass from Marie-Jo Pelletier, New Hampshire defenseman Amy Schlagel unleashed a one-time slap shot that beat Schroeder on its way into the net.

BU was outshot 44-36 over the course of the game, and once again struggled on the power play — the Terriers converted on just one of six opportunities. However, the visitors also had some solid individual performances.

Schroeder totaled 42 saves in her second career start, the most by any one of BU’s goaltenders this season. Bach tallied eight shots to go with her goal; she remains the Terriers’ leader in points with four goals and six assists on the year, as well as in shots with 37. Leslie and defenseman Abby Cook have now posted assists in three straight games for the Terriers, and should continue to be primary providers in BU’s offense.

Next Up: The Terriers will gear up for their first non-conference tilt of the season, as they prepare to host the Rochester Institute of Technology in back-to-back games at Walter Brown and Agganis Arena. The first of the two matchups will be take place this upcoming Friday at 7 P.M.