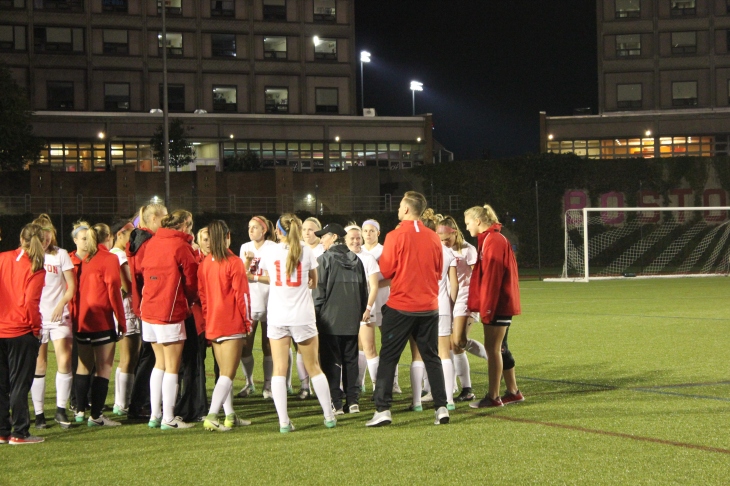 BOSTON — Halloween evening will bring the arrival of the Patriot League playoffs with it, as the Boston University women’s soccer team will face Lafayette at Nickerson Field on Tuesday night.

The Terriers recently earned a pivotal 3-1 victory over Colgate in their final fixture of the regular season, which vaulted them over the Raiders and into a third place finish in the league standings. The Leopards, meanwhile, were able to sneak into the playoffs as the No. 6 seed after two straight wins put them one point clear of seventh place Holy Cross.

BU will be looking to sweep the season series over Lafeyette, having cruised to a 3-0 victory when the two teams met on October 1 in Pennsylvania. They have never faced each other in a playoff round before; the Terriers, however, have won every single matchup with Lafayette since joining the Patriot League in 2013, outscoring the Leopards 18-1. That single goal in favor of Lafayette was their sole consolation in a 6-1 thrashing at the hands of BU in 2014.

Complimenting the Terriers’ wholesale dominance over their upcoming opponents is the fact that they have been regular silverware winners in their conference. BU was Patriot League tournament champions for three straight years from 2013-2015, and have been finalists every single year of their participation in the competition. Last year, the Terriers lost an all-time classic in overtime to Bucknell, 2-1.

In terms of this season’s stats, the Terriers are outshooting opponents 292-176, averaging more than 15 shots per match, and boasting a 0.449 shots on goal percentage. Defensively, BU’s backline has been one of the best in the conference; from September 16 to October 18, the Terriers allowed just one goal in nine matches — including a five-match shutout streak. They continue to allow their opponents an average of less than a goal per game.

Lafayette is being outshot by opponents 251-116, and is allowing an average of almost two goals per match. On a positive note, the Leopards have been remarkably accurate in their shooting — they currently boast a perfect 0.500 SOG percentage.

The Leopards tend to make offensive pushes in the second half as they have scored ten goals in the second 45 this season, compared to four in first halves. Katie Brannigan (3 goals, 3 assists) and Krista Kissell (4 goals) have been Lafayette’s primary attacking outlets, with Alex Stanford also contributing three goals, an assist and 22 shots.

Senior forward Christina Wakefield continues to lead the Terriers in points with five goals and three assists. She is followed closely by freshman and breakout superstar Anna Heilferty, with five goals, two assists and 35 shots to her name. Jesse Shreck and Erin Neville are BU’s top setup women with five assists each, while McKenna Doyle is one of six players to have started all 19 matches this season for the Terriers and has scored three and assisted two more.

A big question for BU is who will get the start in central midfield alongside Shreck. The two candidates, Julianna Chen and Jacki Carty, are both outstanding physical presences and leaders in their own right. Chen is well-loved for her hustle and commanding role in the Terriers’ high press tactic.  Carty, meanwhile, has made an incredible comeback in her senior year with the team, scoring her first career goal as a Terrier earlier this season before netting a pair in the win against Colgate.

Chen has been the first choice for the majority of the season, but it can only be speculated as to whether she will start Tuesday’s match; the junior was kept out of action against the Raiders this weekend due to an injury picked up at Bucknell last week. For head coach Nancy Feldman, the choice will be a hard one — but also one in which she can hardly go wrong.

Kickoff from Nickerson Field on Tuesday is scheduled for 7 P.M.