After the departures of of seven players, the Boston University Men’s Basketball team will need to replace 46.2 percent of their shot attempts from last season. Good sources for these attempts to replace the likes of Eric Fanning and Justin Alston are a trio of sophomores coming off promising freshman campaigns: forwards Max Mahoney and Tyler Scanlon, and guard Destin Barnes.

A six-foot-eight workhorse who plays with a relentless tenacity and effort, Mahoney is a tremendous rebounder, especially on the offensive end of the floor. He maintains a never-ending motor that earns him possession of myriad loose balls.

His game is more of a traditional back-to-the-basket, bruising style. In a modern game where big men are expected to stretch the floor, Mahoney brings a retro style to an uptempo team.

He missed seven non-conference tilts last year due to injury and averaged 12 minutes per game across 22 appearances. Albeit a small sample size, Mahoney demonstrated a polished post arsenal shooting at a 59.5 percent clip.

“Last year as a freshman I pretty much did everything to try and get on the floor,” Mahoney said of his hustle. “I found out that the harder I played and the more I gave it up for my teammates, [that] it helps us to win games.

“I like getting on the floor and getting dirty and bringing the energy.”

The Terriers head coach certainly appreciates the effort of his young big man.

“He’s a physical kid, a tough kid,” Jones said. “He’s a guy that’s going to be able to maximize his abilities because he’s such a hard worker.”

One skill Mahoney said he wants to improve on is free throw shooting. He shot 47.4 percent from the charity stripe, but did go 4-6 on free throw attempts in the Patriot League Tournament, before the Terriers fell in the conference semifinals.

“A lot of that was mental last year being a freshman and nervous at the line,” Mahoney said. “I worked on getting a routine down, I also did a lot of breathing exercises to help calm myself down.”

Tyler Scanlon was named to the 2017 Patriot League All-Rookie team and has the most experience out of the sophomores. His breakout performance came in a 15 point, 9 rebound performance against North Carolina State in a non-conference road game. He benefited off the playmaking of his teammates.  This year, he’ll look to create more for himself and help set up his fellow Terriers.

“I’ve been working getting to the lane and being able to create from there,” Scanlon said. “Besides being able to knock down open shots, I’m trying to make sure I can get other guys shots and really open up the flow of the offense.”

Both a football and basketball star in high school, the six-foot-seven Scanlon chose the hardwood, and is relishing every moment he has on the floor. He averaged 8.1 points and 3.3 rebounds across 25.3 minutes per game a season ago. Scanlon also connected at a 40.4 percent clip from beyond the arc in his freshman campaign.

In his own words, Scanlon not only is trying to evolve into a more complete player, but is honing in on improving the consistency of his outside shooting.

“It’s tough being a shooter because you go through slumps and struggles,” Scanlon said. “You go through highs and lows but you try to stick with it and [say] tomorrow’s a new day, the next shot is going in.” 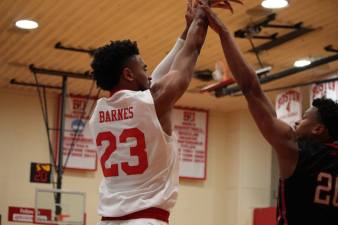 Barnes began his Terrier career with a promising start, although he was limited to just 10 games in his freshman season. At six-foot-six with a long wingspan, he plays solid defense against both guards and forwards, and flaunts an above average touch from the perimeter.

In his collegiate debut at Northeastern, Barnes was one of the few bright spots, connecting on three 3-pointers from downtown en route to 11 points in 18 minutes. He got his first career start in a battle at the University of Connecticut.

“Moving forward, last season helped me to understand that I can play at this level and any level,” Barnes said. “It’s also going to help me grow as a leader and make my teammates better from that.”

Barnes, who played a season of prep school basketball before enrolling at Boston University, is the eldest of the group at 21-years-old. Scanlon and Mahoney are both 19. Barnes said the added experience before college helped him to make an immediate impact.

“The extra year helped me from a maturity standpoint,” Barnes said. “It makes me take things more seriously and grasp the moment because I know how precious [basketball] is.”

The now graduated Alston and Fanning leave a looming gap down low for the Terriers, and on the wings for BU, who was picked to finish second in the preseason Patriot League poll. With Mahoney’s combination of size and athleticism, Scanlon’s shooting prowess and Barnes’ all-around game, look for all three to contribute in increased roles.

The team heads for Vermont on Friday for a scrimmage against their former America East rival for their first live game action of the season.

“We want to go in there and play [how] we play on both sides of the ball,” Jones said. “It’s a chance to figure ourselves out.”