The hope of Joe Jones’ first NCAA Tournament appearance in six years at the helm at Boston University, came to a bitter end in the semifinals of the Patriot League Tournament, when his Terriers fell 91-89 in double-overtime to the Lehigh Mountain Hawks.

The heartbreaking loss brought an end to an up-and-down season that gave fans a whirlwind of an experience. Yet somehow, amidst all the chaos, the Terriers still managed to finish second in the league, win 18 games, and come three points away from playing for a bid to the big dance. It’s difficult to judge whether this team failed or succeeded, but we’ll dissect what went right, wrong, and what the future of the program looks like.

The most blatantly frustrating thing about the 2017 Terriers was their inconsistency. BU had a less-than stellar non-conference season where they got blown out by Canisius on their home floor and lost at UMass-Lowell, in one of the worst losses in Jones’ tenure. But the Terriers also rattled off a four-game winning streak, knocked off Northeastern, and played Connecticut and North Carolina State tough on the road, losing by a combined six points in the two contests. 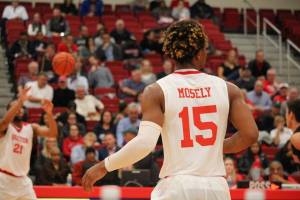 Overall though, a non-conference record of 5-7 was less than ideal for the program heading into conference play. A major development late in non-conference play, was the dismissal of guards Cheddi Mosely and Destin Barnes, and center Blaise Mbargorba for an internal team matter. The loss of three key bench pieces, including the talented offensive game of Mosely, provided a huge hurdle for Jones and his team.

However, the Terriers started conference play strong winning their first 5 games and using a defensive mindset as the catalyst. BU spent much of the non-conference trying to outscore teams but when Mosely was dismissed and junior guard Cedric Hankerson struggled with his shot, the team focused on defense and rebounding rather than three-point shooting.

The strategy worked but once again consistency remained an issue. After the 5-0 start, BU lost three in a row and four of six, even though one of those wins was against the preseason favorite Lehigh Mountain Hawks. It was a pretty simple formula for BU, when they made their outside shots and held teams to under 70 points, they were going to win.

Sitting at 7-4 in league play, the Terriers went on to win four in a row, setting up a battle for first-place against Bucknell with just three games remaining. The Bison however, overwhelmed BU with their length and size, proving that the Terriers were not ready to win the league title.

Jones’ team then split the final two games of the season, losing at ninth-place Army before winning at Holy Cross in overtime, to finish the Patriot League at 12-6 in an second place; their preseason spot.

The regular season saw the Terriers go through peaks and valleys. There were games (at Lehigh, at Holy Cross) where BU showed their potential to win the league. They could make shots with anyone in the league thanks to seniors Eric Fanning (14.9 ppg) and Justin Alston (12 ppg) and when their defense led to offense they were virtually unstoppable.

But too many times, BU failed to bring their defensive effort, were out-rebounded, and turned the ball over, leading to losses against teams with less talent. On top of that, the Terriers were so reliant with the three-point ball, that when the shot wasn’t falling they had trouble scoring in half court sets.

In their quarterfinal tournament game against Loyola, the Terriers prevailed 64-60 but nearly blew the game after scoring just 29 second half points and going 3-20 3FG.

The same problem occurred in the semifinals vs. Lehigh where a sluggish first 30 minutes saw them go down by as much as 17 in the second half. From there on out, BU dominated the game until the second overtime but were unable to pull out the victory. The semifinal loss though was not something the Terriers should hang their heads about, as the game could have gone either way in the overtime periods. Instead it resembled the Terriers season, they were always right there, until they weren’t.

BU had the talent to win every game they played in but it seemed like they never got over that hurdle. Something was always missing and it showed with the 18-14 record and the semi final exit. Of course Jones and his staff deserve credit for having this team near the top of the league standings for the third time in four seasons, but it felt like this was the year the team would have finally made it back to the NCAA Tournament.

They had one of the best scorers in the league in Fanning, who could seemingly get a bucket or a draw a foul whenever he wanted, they had an experienced big man in Alston who improved mightily with his footwork and low post scoring, and they had junior guard Cedric Hankerson, who was a first-team member before his ACL tear in 2015.

However, Hankerson failed to 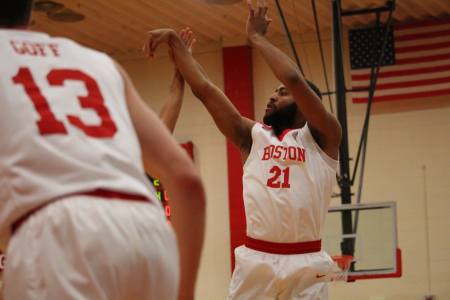 return to his former self, disappearing on the offensive end for games at a time, and outside of Fanning and Alston, the Terriers were unable to have consistent scorers. Mosely was supposed to be that third guy but after him and Barnes were suspended, they relied on freshman Tyler Scanlon, Max Mahoney, sharpshooter Will Goff, and the point guard rotation of Eric Johnson and Kyle Foreman.

The loss to Lehigh was obviously a heart-beaker as they easily could have won that game, but after the performance Bucknell displayed in the Patriot League Finals, it might not have mattered.

The future of the program is difficult to foresee. The two leading scorers in Fanning and Alston are gone but everyone else returns. In his sophomore season, Hankerson, averaged 16 ppg, becoming one of the most prolific scorers in the conference. That year he was the guy, but after missing all of 2015-2016 with an ACL injury, Fanning became the guy and that carried over to this year as well.

With the team now in Hankerson’s hands, it will be interesting to see if he can return to the player he once was. Another key factor is whether rising senior Cheddi Mosely will return from suspension. If Mosely is back and can develop his offensive arsenal even more, him and Hankerson can provide as good of a scoring combo in the league.

Also returning is senior forward Nick Havener, who will be asked to give the team 25-30 frontcourt minutes as opposed to the 15 minutes he’s played off the bench in recent years. Havener is an exceptional rebounder and defender and does a lot that doesn’t show up in the stat sheet. With Alston gone, Havener will have to be a more consistent scorer down low.

Both Kyle Foreman and Eric Johnson will be back handling the point guard duties, and outside of taking the care of the ball, the starter will be decided by who can make more shots.

The keys to the future of the program however, lie in the hands of the young players. Rising sophomores Tyler Scanlon and Max Mahoney showed promising flashes in their rookie season. Scanlon earned All-Rookie Team honors, and thrived in a spot-up shooting role. Moving forward, if Scanlon can put the ball on the floor and drive the basket, a skill that will come as he gets older and stronger, he can be a top scorer in the league.

As for Mahoney, he showed glimpses of being a dominant big man in the league at just a young age. Mahoney can already score in the post, showing skilled footwork for a freshman, and a soft touch around the basket. The key to Mahoney’s game moving forward will be his jump shot. If he can establish a 15-foot mid range shot to his arsenal, he will be a special player.

Next year will be a key year for both Scanlon and Mahoney as they can learn from a veteran laden before they take over the program in 2018.

Jones and his staff will also be bringing in a talented recruiting class next fall, led by 3.5 star commit Walter Whyte. Whyte will be joined by guard Javante McCoy and big man Sukhmail Mathon, in what looks like a talented class.

The future of the Terriers look promising, especially if Barnes returns from suspension, but the wound still stings from the double-overtime loss to Lehigh. The 2016-2017 season was supposed to be Boston University’s year. Now the program will have to wait at least one more year to make it back to the big dance.